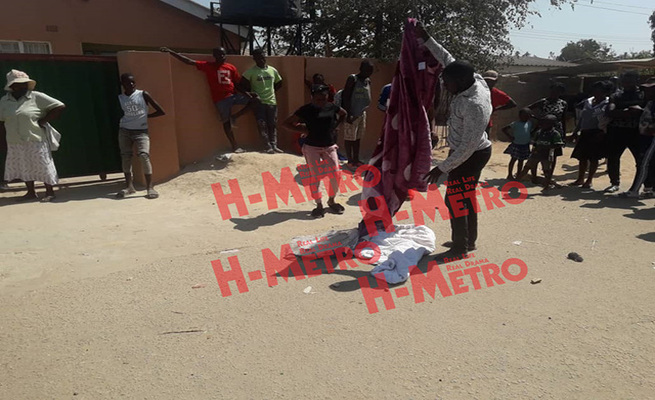 There was drama in Chitungwiza yesterday over a dumped new blanket which many pointed to use of juju.

Such was the drama that some said they had heard the blanket talking but this could not be proved as it lay still when H-Metro arrived in Zengeza 2 where the incident occurred.

“I saw the blanket in Chikwana in the morning. There was a man who was selling this blanket, he was wearing a green t-shirt.

“He was saying he picked the blanket somewhere near Chikwana.

“He sold it (blanket) to an unidentified lady and that is when the blanket started talking.

“The woman who took the blanket was saying she wanted to sell it to some illegal gold miners (makororokoza) in Mazowe,” the so called eyewitness said.

Word was making rounds that the blanket had indicated that it had found resting place in the woman who had bought it.

It is alleged the woman heard the blanket saying: “Waita hako wandizorodza mwana wamai.” and that prompted the woman to return it.

The eyewitness continued: “The woman then returned the blanket, a lot of things were happening on the blanket but later stopped when people started to gather,” said the eyewitness.

The source said when the blanket was left at Chikwanha, another man took it saying there is no such thing like a talking blanket adding that he had indicated that after all it was brand new.

“He (the man who took it) left Chikwana and that’s when we heard that there was a blanket talking in Zengeza 2 and we had to rush and see if it was the same blanket,” he said.

Another source told H-Metro that they saw a man dropping the blanket and speeding off as if he was being chased by someone or something.

“I saw a man dropping this blanket at that corner and running away.

“We thought he was a mad person from the way he took off up until I heard the children who were near saying the man was saying the blanket had spoken to him.

“It was then taken to where it is now by some individuals who were saying there was nothing like that and wanted to prove that it was fake.

“The blanket is brand new and we don’t know what really happened but I suspect it had something to do with goblins and witchcraft,” another eyewitness said.

Other passers-by could be seen lifting the blanket shouting “A blanket does not talk”.

The blanket was later burnt by one man who guards a nearby car park and the crowd dispersed.