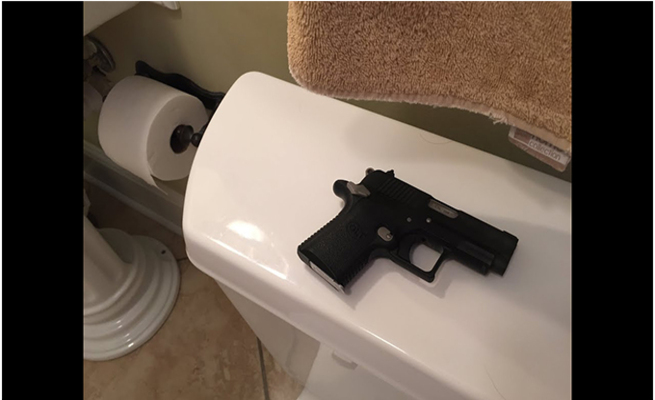 A seemingly absent-minded security guard with a local security company who was deployed at a bank landed himself in trouble when he allegedly forgot his service firearm in the toilet where he was relieving himself.

It is reported that after answering the call of nature, a forgetful Tonderai Manyange (38), employed by Modern Security Company, left his service weapon in the toilet and nothing clicked in his mind until it was picked up by another security guard who handed it over to the police.

Circumstances are that on 16 September 2020, Manyange was on duty and stationed at the National Building Society (NBS) situated along Joshua Mqabuko Nkomo Street, between 8th and 9th Avenues armed with a firearm — a 38 Taurus revolver which was issued to his employer for the purpose of protecting cash and other valuables in transit.

It is reported that around at 2.30pm when nature called, Manyange briefly left his workplace going to the toilet at Barclays Building situated next to his work station.

It is reported that after relieving himself, he left his service firearm in the toilet, a move deemed to be contrary to the prescribed provision of the Firearms Act as the revolver was likely to fall into the possession of an unauthorised person.

It is further reported that at around 2.45pm the firearm was picked up by Kamson Mpofu who is also a security guard at SuperMed Pharmacy which is adjacent to Manyange’s workplace.

After picking up the firearm, Mpofu reportedly secured it at his workplace before proceeding to Bulawayo Central Police and filing a report.

Investigations by the police led to the arrest of Manyange.

For the offence Manyange was brought to court where he appeared before Bulawayo magistrate Tinashe Tashaya charged with contravening Section 28 (2) of the Firearms Act Chapter 10:09.

He was, however, not asked to plead and was remanded out of custody on free bail pending commencement of the hearing on his case.