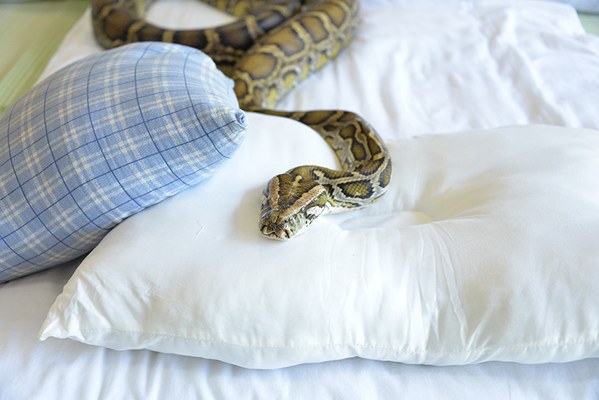 A Mutare magistrate early this week issued a warrant of arrest for a commercial se_x worker who failed to appear in court after she had been found in possession of a six-metre long python at a lodge in the eastern border city.

Queen Mpofu is being charged with contravening the Parks and Wildlife Act for allegedly possessing a specified animal.

Mpofu who was out on bail was in a no show although she had attended a court session the previous day with her co-accused, Loice Samhere. On Tuesday, Mr Tendai Mahwe, acquitted Samhere and said there was no incriminating evidence linking her to the crime.

Mpofu’s judgment was due on Wednesday but she did not show up. Samhere’s lawyer, Mr Cosmas Chibaya, said his client had been dragged to court as the owner of the Green Gate Lodge, where the snake was discovered.

“There was no evidence linking her to the case and that is why the court cleared her of any wrongdoing,” said Mr Chibiya.

It is the State’s case that on December 4 2019, Simbarashe  Mupuradzuva entered Mpofu’s rented room for inti_macy.

While inside the room, he placed his satchel on top of a bag which contained a python.

The python reportedly made a strange sound and movements, forcing Mupuradzuva to flee from the room, shouting for help.

During trial, district public prosecutor Mr Tirivanhu Mutyasira called on the key State witness, Mupuradzuva, to give an account of how he found the reptile in Mpofu’s room at the Green Gate Lodge.

Mupuradzuva said after discovering the snake, he rushed to make a report at Mutare Central Police Station.

Upon his return with three police officers, they could not capture the reptile out of fear. The police officers therefore went back to their station to get reinforcements but when they got back, the snake was nowhere to be found.

Samhere argued that although she owns Green Gate Lodge, she is not directly involved in the day-to-day operations of the establishment. She said once clients make bookings at the lodge, she has no control over what they bring into their rooms.

During previous appearances in court, Mpofu revealed that she is a commercial se_x worker. She said although she was booked at the lodge when the incident occurred, the snake was not hers.

On the night in question on January 3, Mpofu was with a client who had engaged her for the whole night. She said while her client was asleep, Mupuradzuva arrived.

He also wanted se_xual favours from her.

Mpofu went out of her room and met Mupuradzuva in the passage.

According to Mpofu, Mupuradzuva insisted they get intimate. The two then sneaked into another vacant room. Mpofu said in this room, they found a bag containing the python.