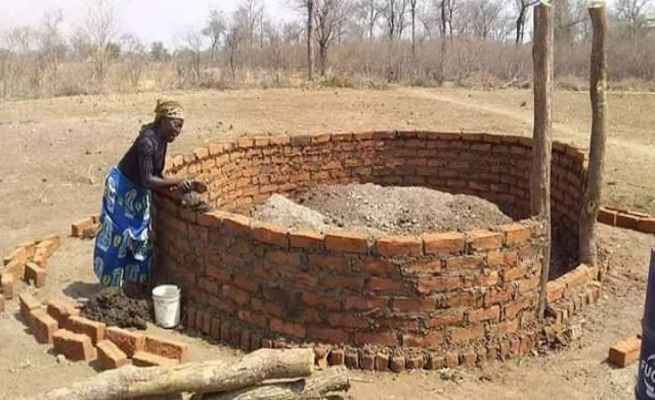 A picture of an old woman hard at work using her bare hands to build a hut recently circulated on social media and many people dismissed the picture as fake news.

TellZim, however, investigated the issue and found that the woman actually exists, and her birth name is Patricia Mahinzu who stays in a resettlement area commonly known as ‘Kuma 3-Hectare’ some few kilometres behind Cottco Depot in Chiredzi.

With the help of sources including former Zaka West Member of Parliament (MP) Festus Dumbu, TellZim was able to track Mahinzu who is simply known as Mbuya Chisare.

The old woman’s farm brick and mud hut is almost complete although it shows signs of poor workmanship.

Mbuya Chisare provided her national ID which shows that she was born in Baye village near Jerera in Zaka district on the September 12 1942 meaning is 78 years of age.

“I was married to Jalisi Maiza of Chijubana village in the Chitepo area of Chipinge South but he died in July 2005. We were blessed with two daughters and a son but one of our daughters is now late,” said Gogo Chisare.

Her second daughter, who has two children of her own, is now a widow and is critically ill at her marital home in Chipinge district.

Mbuya Chisare’s only son illegally migrated to South Africa ‘many years ago’ leaving behind a wife and three children and she has since completely lost touch with him.

She now looks after three grandchildren including a 16-year-old girl who dropped out of school while doing Grade 3.

After the death of her husband, Mbuya Chisare went to live with her daughter and her son-in-law in Chipinge but when the son-in-law died, she moved out as there was no more food at home.

She said she worked in the resettlement areas for several years without a salary, but just for food so that she would not starve.

Three years ago, she got a piece of land in the Kuma 3-Hectare area where she built a pole and mud hut.

Gogo Chisare’s daughter-in-law, who was abandoned by her husband when he illegally migrated to South Africa, then heard that she had found her own place.

She sought and found her; stayed for a short period of time before disappearing, leaving all her children in the care of Mbuya Chisare.

“I have received some food donations from the Church of Christ and it helped a lot. I have not yet managed to get my name registered for the Social Welfare Department’s food assistance programme so we don’t have enough food for most of the time.

When contacted for comment, Chiredzi Rural District Ward 29 Councillor Keuswell Muvengi said he had never heard about Mbuya Chisare and her plight.

“I don’t know about that woman. I will summon village chairpersons to find out more about her and how we could assist her,” said Muvengi.

Mbuya Chisare told TellZim she looked forward to finish building her new hut before the onset of the rains.