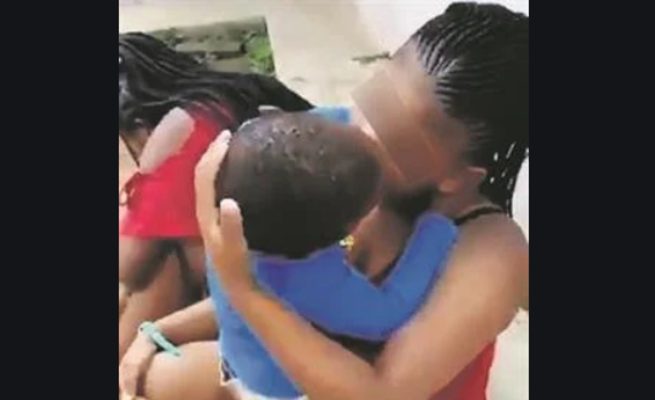 MZANSI slams the woman in the video ki_ssing a little boy in a sεxy way!

The video has been making the rounds on Twitter and angry social media users have called for cops to arrest the woman for sεxual abuse of a minor.

In the video, the woman is sitting down, calling on the boy aged about four or five to ki_ss her and later, he climbs on to her lap as the ki_ssing continues. The person taking the video cheers, while another woman cheers from the side. It goes on for about 40 seconds. It’s unknown where it was taken, but the two women can be heard speaking Swati.

Social media has called for police to find the women involved.

@KaConfessor said on Twitter: “This is how older women got away having se_x with young boys. It starts from here.”

“Report this woman molesting a child.”

“Report this woman m0lesting a child.”

Ntshieng said: “Almost every man experienced this at a young age and led to some being perverts and having horrible relationships with women.”

The video led to discussions like if it was a man doing it to a girl, would it be dealt with differently?

Tshilidzi said: “South African men at it again! They want to use this to justify their disgusting acts against women. What is more disturbing is that this woman doesn’t see anything wrong.”

MacMillanZA said: “Many men go through this at a young age, yet men are always painted as the predators.”

The Department for Women, Youth and Persons with Disability said this was a serious matter and they were gathering facts and talking to police before they could respond.

In a statement issued by The Department of Woman, Youth and Persons with Disabilities (DWYPD) the department urged the public to protect the rights of children.

This comes after a video went viral on twitter, with two women and a young boy being pressured into ki_ssing one of the women in a se_xualised manner.

The Department of Social Development and SAPS are on the matter and verifying the origins of the video.

“The Department is also concerned about the sharing of this video on social media platforms and strongly urges South Africans not to do so, to protect the rights of the child. The distribution of such a video must be viewed as a criminal act.”

The SAPS has confirmed that the matter is with the Family Violence, Child Protection and Sexual Offences (FCS) Unit.