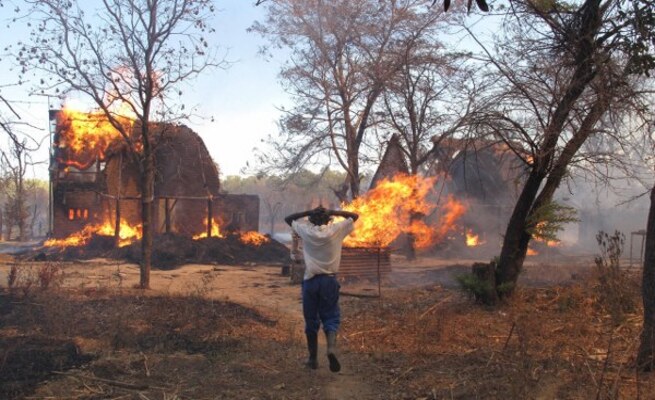 Some 362 people from Chipinge are living by the roadside after their homesteads were burnt down by Police during an eviction from Daff Jourbert’s Anex Farm in Ward 11 Chipinge two weeks ago.

Zanu PF political commissar for Chipinge, Ketai Chandaengerwa who visited the families on Thursday could not stomach it. She expressed outrage at what she saw and criticized her party for lacking sympathy when she addressed the families in the presence of Chipinge Times reporters on Thursday.

She bemoaned the environment and called on President Mnangagwa to intervene otherwise Zimbabwe’s independence becomes meaningless with people living under such conditions.

“Chiefs who took over farms left by white farmers drive through here every day but their hearts are not touched by this situation. We all fought for this country but some are enjoying the fruits while others have bloody tears,” said a fuming Chandaengerwa.

When Police burnt down the homesteads at Daff Farm, some blankets, food and other belongings were burnt, said the families in interviews with Chipinge Times. They were then ferried from the farm and dumped in a bush along Mt Selinda – Chipinge Highway.

They said they also lost identity cards and birth certificates during the fire.

Chandaengerwa criticised her party for being insensitive to the plight of the evicted families. She warned that the situation would be worse for the families with just a few weeks to go before the onset of the rainy season.

The evictees later moved away from the bush where they were dumped and are now camped at Chiriga Business Center where they feel safer. They have no toilets, shelter or clean water. Food has run out for most of them and they are sharing the little they have.

There were soaking rains a few days back and they had to endure it. Chipinge is home to frequent spells of chilly weather and the families are living with that too.

Land wrangles have become a way of life in Chipinge as powerful and well connected Zanu PF officials continue to get offer letters for land in one of the country’s richest districts. The downtrodden are paying the price for the unbridled greedy.

Some of the evicted people are farm workers who lived at Daff all their lives.

Their eviction followed a court order obtained by Zondai Siyakhanani in 2019. The basis of the eviction is that they were violating section 3 of the gazetted lands act chapter 20.28 for occupying the said property without lawful authority but the settlers claimed that part of the occupied land was not owned by anyone.

“We see influential and powerful people who pass by the road in their luxurious vehicles and I wonder why they don’t take notice of the suffering families.

“This is a disaster for Zanu PF as a party. These are people who have supported the party but are getting this raw deal,” said Chandaengerwa in an emotional address to the families.

She said that it was inhuman for such a large group of people to stay in a place without clean, safe water, toilets, food and shelter.

The people are gathering water for their domestic chores from Chiriga river. They cook from few pots that were left and they all bath along Chiriga river.

They are sleeping at Chiriga shopping centre under the trees.

They said they are appealing to well-wishers about their food situation.
Their daily routine is going for piece work from surrounding areas.

There are fears of waterborne and other communicable diseases and to date a child has been treated with diarrhea. There is also fear of Covid19 as social distance is not observed and the families are not provided with masks.

“We were ferried and dumped by the roadside after Police burned our homes and belongings. Our challenge is lack of clean water, toilets, food and shelter. We have nowhere to go,” said one Magen’a.

The villagers told Chipinge Times that they approached the Minister of State for Manicaland Ellen Gwaradzimba with their problem.

“I have nothing to discuss with Chipinge Times, You always write negative stories,” said Gwaradzimba.“We have many little babies and we are afraid of communicable diseases. Some babies are having running stomachs and it is probably because of the unsafe water we drink from a nearby stream,” said another villager.

Reuben Bangira, Zanu PF vice chairman for youth expressed grave concern at the situation. He said Zimbabwe must build communities where every human being is respected.

“We depend on farming for our livelihood. The rains are coming and Government seems to have no plan for us. We are also appealing for food,” said Bernard Hanyani.