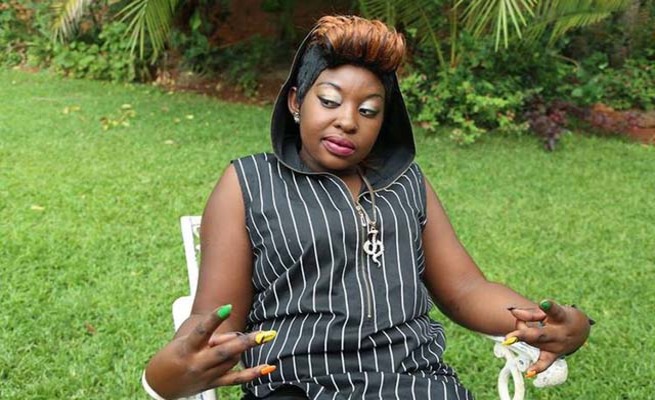 FEMALE dancehall chanter Lady Squanda was saved from serving jail time after her victim withdrew charges of robbery on Wednesday.

Lady Squanda, real name Sandra Muchaneta Gazi, was on Monday arrested together with her accomplices Rodney Gwasira, Denzel Tanyaradzwa Chiwenga and Raphael Chidhoza in a robbery case where the complainant lost his cash, laptop and cellphone in Zengeza.

The laptop and cellphone were recovered at Lady Squanda’s house in Zengeza 3.

Narrating her case to H-Metro on Thursday following the withdrawal of the robbery case, Lady Squanda said the complainant decided to free her from the hook at the last hour.

“What happened is that there is a guy who had my Laptop hard drive; he came here and promised to bring the drive to me,” said Lady Squanda.

“So I didn’t want him to go alone and bring the drive because he had been telling me stories since February this year.

“He came at one time asking for a laptop and this guy claims that he is Hwindi’s DJ by the name Daf Dee and I gave him.

“He later returned the laptop without a hard drive and after several pleas I decided to take the matter to police.

“On the day in question he came in a way to settle our differences about the laptop and I told him that he had given me a laptop without a hard drive.

“We had a heated debate about it and we agreed to take the matter to police and he suggested to leave with me a laptop he had promising to go and bring my hard drive.

“The next thing was to see him in the company of police officers and Gwasira arrived during the scuffle and attacked a police officer by throwing a brick.

“Police officers ordered me to surrender all stolen things and they took the laptop and the matter turned sour leaving me with bruises all over my body and it affected my operation stitches since I recently gave birth.

“Daf Dee, who happened to be the complainant, was detained over the case I reported against him in connection with my laptop.

“I was ordered to go home and report the following morning and Daf Dee decided to withdraw the case against me and I also withdrew my case after Daf Dee finally surrendered the hard drive he was holding on to since February,” said Lady Squanda.

Away from the robbery case, Lady Squanda thanked God with a baby boy saying she is now a mother of two girls and one boy promising to return to the stage soon after Covid-19 restrictions.

Lady Squanda said the pandemic negatively affected her source of income although it gave her time to nurse her baby and pen songs she said will be releasing end of October this year.

“I want to thank God for sparing my fans and I want to thank government for the lockdown because it saved our lives from the pandemic,” said Lady Squanda.

“I want to thank my fans for reviving me by posting loving messages. I want to assure them that end of this month I will be releasing singles collection and a video,” said Lady Squanda.

She introduced the H-Metro team to her husband who was captured by H-Metro holding their baby at a police station on Tuesday.