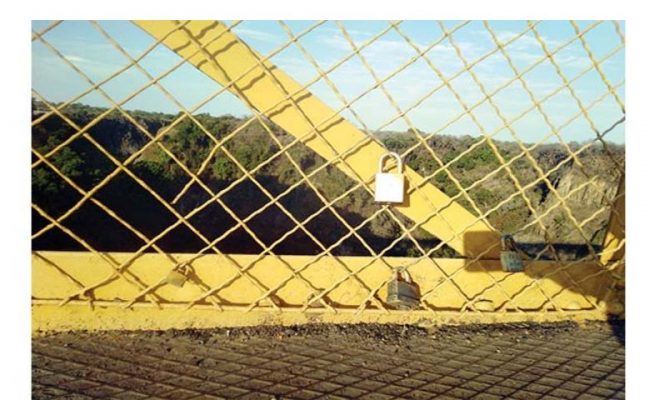 VICTORIA Falls is famed for tourism, attracting thousands of visitors from all corners of the world for leisure and business.

A tour of the Rainforest and view of the Victoria Falls Bridge are popular leisure activities together with bungee jumping that takes place at the top of the bridge, white water rafting which starts below the bridge, gorge swing, boat cruise and game drives among several others.

However, an unusual form of attraction has been luring people to the Victoria Falls Bridge where visitors have been doing a r0mantic gesture of leaving locked padlocks on the railings of the bridge after making vows of undying love.

Chronicle visited the bridge this week and observed some padlocks of different sizes hanging from the support pillars.

The Victoria Falls Bridge is situated on no man’s land between the Zimbabwean and Zambian borders and accessible to tourists from both countries’ towns of Victoria Falls and Livingstone.

A quick count showed there are 52 love locks on support pillars on the eastern side of the bridge facing the waterfall and 12 on the western side facing the Victoria Falls Hotel. This excludes the official one securing the small gate to access the bungee jumping cage.
Some of the padlocks are now rusty while others have been painted several times together with the rails.

They are in different sizes and types and many are emblazoned apparently with lovers’ initials, declaration of undying love and dates, probably depicting when the sweethearts made the vows on the bridge.

Some of the messages engraved on the padlocks stated simply: “Lovers forever” while some of the names on the padlocks are: “Barb + Monty August 2017, Katya & Mana, Ada & Clara Wil & Dillie and Nicole & Tryson.”

A love lock is a padlock that lovers lock to a bridge, fence, gate, monument or any public structure to symbolise undying love. The sweethearts throw the key into the river to symbolise fidelity and commitment to each other.

Chronicle understands that the practice has been happening for some years on the bridge as it has been elsewhere in the world.

After throwing the key into water, the two would reportedly walk away and never look back until they get to their place of residence, be it a lodge or anywhere in town, a source said, adding that the belief of not looking back is derived from the Biblical story of Lot’s wife who turned into a pillar of salt after turning back. The lovers would not return to the place in their lifetime as long as their love subsists.

Tour guides who accompany tourists to the Victoria Falls Bridge which is currently closed because of the lockdown said they have witnessed some foreign tourists making promises putting the love locks. “It looks like a belief by people from western countries where lovers make a form of covenant which we can call isifungo locally. They just get to the bridge like everyone else and in most cases, you won’t even notice because they make vows without any witness.

“We have seen some of them though. They buy a padlock, inscribe their names and lock it to the pillars before throwing the key into the river. The agreement will be that none of the two would end the relationship and if that happens, they would first find the key which is not possible,” said a bungee jumping guide who preferred to remain anonymous.

While in western countries lovers usually profess their undying love on Valentine’s Day, those closer to the Victoria Falls Bridge said most padlocks are put during the festive season.

The romantic gesture of leaving padlocks on bridges is a common practice in many countries such as France, Canada, Wales, Taiwan, Scotland and USA, all Victoria Falls’ main tourism source countries.

In some countries, bridge authorities have reportedly resorted to removing the padlocks every year. In France authorities cut the padlocks away after part of the Paris Bridge collapsed a few years ago because of 45 tonnes of over a million padlocks left on the bridge.

The National Railways of Zimbabwe has also reportedly removed some love locks from the Victoria Falls Bridge.

Tour guides have said no local person had been seen doing the practice on the Victoria Falls bridge.

Some people have likened the practice to ulunyoka where spouses use social technology (juju) to secretly lock each other’s manhood or womanhood to stop engaging in extra marital sex.

Some have however said the two are different because ulunyoka is done without the knowledge of the partner while love locking is an agreement by the lovers.

“Ulunyoka is done by some cultures and only those who do it know how it is done and how to reverse it,” he said.

One would also recall bumping onto couple’s names inscribed on tree trunks in the bush especially in rural areas.

Taking vows is a common rite done before a marriage officer in church.

In the Catholic Church, when a couple makes vows, their hands are sometimes tied together in symbolism of an unshakable union.

A Catholic priest Fr Eusebias Nyathi said making vows before God is confirmation of the “till death do us part” marriage sacrament.

“When a couple makes vows in church that becomes one of the rites symbolising a union between two people and that no man can separate what God has joined together. In the Catholic

Church we believe in no divorce that once joined together, no union should be broken until death,” said Fr Nyathi.

The big question is: “Are all those that have engraved their names on love locks still together?”