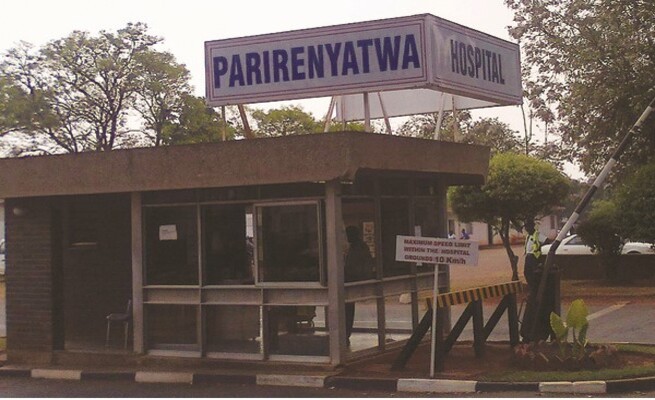 A totally bogus doctor, a young man without a medical qualification to his name, worked in the Parirenyatwa casualty unit for seven months until Tuesday this week, accepted by staff, security and patients simply because he wore a white coat and carried a stethoscope.

Admire Chisi (25) was finally rumbled when the head of casualty took an interest, found the young man was remarkably ignorant, investigated and called the police, who took him away on charges of impersonating a public officer although other charges may be laid. It is unlikely that he was paid, but that is not yet certain

But what concerns a lot of people is how human resources, security and hospital administration generally could admit him into the building, let alone allow him to deal with patients, for so long.

Chisi took advantage of the doctors’ strike and the general staff shortage in the health sector to penetrate the hospital system in April this year, although that was when there was a tight lockdown and security had been supposedly tightened. But the increased pressure on senior medical staff might explain why it took so long to figure out he was a very bad doctor if qualified.

Parirenyatwa Hospital yesterday issued a statement confirming Chisi was a fake doctor and that they had handed him over to the police.

“On October 20 2020, Parirenyatwa Group of Hospitals discovered that the Accident and Emergency Department had been infiltrated by a fake medical doctor who posed as a physician registrar.

“The matter was discovered after our vigilant casualty staff doubted his medical proficiency and made some inquiries. The suspect has been handed over to the police who are now handling the matter,” reads the statement.

However, labour lawyers, medical experts and other commentators questioned how the hospital could enjoy the services of a bogus doctor for seven months.

They blasted the leadership for failing to properly supervise staff while the security section of the institution was criticised for laxity.

“Failure to detect such a bogus doctor for that long smacks of gross negligence or dereliction of duty by hospital management, human resources and security departments.

“The bogus doctor committed a serious criminal offence by falsely posing as a doctor and endangering human lives at such a big and busy hospital especially now during coronavirus.

“There is need for an overhaul of management, human resources department and security departments at that hospital to prevent future incidents like this,” he said.

Zimbabwe Medical and Dental Practitioners Council president Dr Francis Chirowa said it was surprising that a hospital with sectional heads could take that long to detect the fraud.

“One cannot just walk into the hospital and assume duties of a medical practitioner without producing a practicing certificate. It is surprising considering there is a head of Casualty who should be able to know all the doctors under him and ensure there is a duty roster for all staff,” he said.

Dr Chirowa said Chisi’s case was the third such fraud since independence and measures must be put in place to protect patients.

“In the 1980s we had a similar case at Harare Hospital (now Sally Mugabe Hospital) where someone masqueraded as a doctor. We also had another case of another man who illegally practiced at Mpilo, United Bulawayo Hospitals and Mberengwa. That one ended up causing deaths.

“The Parirenyatwa case is now the third one and there is need for management at hospitals to be more vigilant to save our patients from fake doctors,” he said.

A security expert Mr Brian Kashangura of Vandrift Security Services said the case exposes the laxity of the security at the hospital.

“It clearly shows there are no systems to protect patients at the hospital. How can a stranger work for that long without being questioned? The chief executive officer should do the honourable thing and step down,” he said.

“This type of mischief is common to many professions in Zimbabwe. What needs to be done is to introduce an electronic tag system to identify each hospital staff member using identity tags. Further, all doctors must be issued with practicing certificates which can be produced upon demand by the general public.

“Lastly, ordinary accountability systems like staff meetings, duty rosters and random spot checks of medical personnel against the database of the Health Professions Authority can be done to prevent a repeat of this act,” he said.

The Herald established that police searched Chisi and recovered a stethoscope, medical needles, medical hair caps and other medical tools.

The Herald visited Chisi’s house in Ruwa where neighbours were convinced he was a genuine doctor working at Parirenyatwa Hospital.

A neighbour, Mr Brian Chivona, said: “Admire stays here and we know him as a medical doctor. He goes to Parirenyatwa Hospital daily. He stays here with a friend and his sister joined him recently,” said the neighbour.