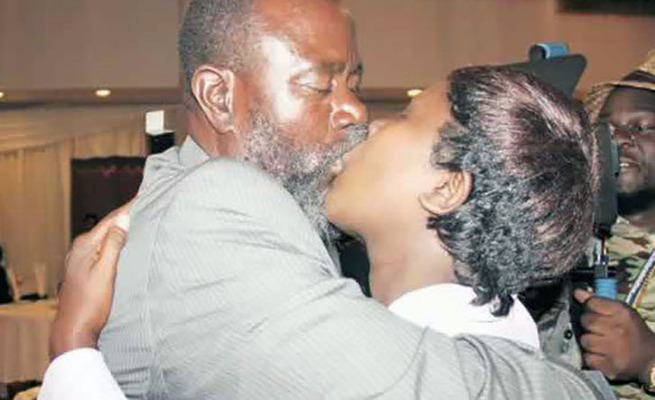 THE wife to the man alleged to have been caught ki_ssing and care_ssing MP Joseph Chinotimba’s second wife pleaded for forgiveness soon after the fracas.

Mai Mahachi begged MP Chinotimba for forgiveness on behalf of her husband saying the latter could have lost feelings for her.

She was speaking at Milton Park Police station where the two couples had been taken for counselling.

“I want to believe he did it in foolishness or he might have lost feelings for me leading him to salivate for someone’s wife as if I was not available.

“Probably I failed to sεxually satisfy him.

“His reason to date a married woman might be because I no longer look attractive but he married me and went on to give vows before a minister of religion only to act different today because of Mai Chinotimba.

“I have handed him the ring he gave me. I had been warned by one of the prophets that he had lost faith and was cheating but I did not take it seriously.

“I will definitely retaliate by leaving someone injured I swear.

“My God will surely strengthen and guide me although my husband has decided to fight the spirit of God by engaging in evil acts,” said Mai Mahachi.

She wrestled with police officers demanding to accompany Mahachi to Maridale Park in Norton where they reside.

“Why do you want me to sit behind him when the front seat is for me not for Mai Chinotimba?” shouted Mai Mahachi.

Mahachi and his wife were led by two police officers in separate vehicles to Maridale Park as they sensed danger after the latter threatened to deal with her husband.

Dzvitiro has since been ordered to leave MP Chinotimba’s house in Belvedere.