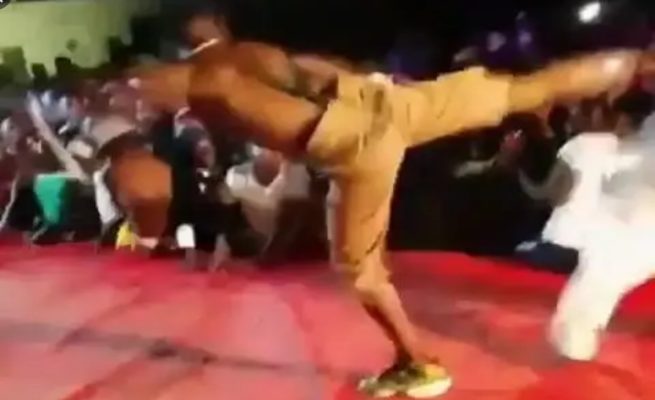 Chanter of the moment Jah Master on Tuesday ‘ki_ssed and made up’ with a Chinhoyi fan he kicked off stage over the weekend.

The overzealous fan, Bright “Britto” Mudhachi, was trending on social media after being assaulted for gatecrashing the stage during Jah Master’s performance in Alaska.

A video of the attack went viral with the majority of fans condemning Jah Master for his wayward behaviour.

However, the Hello Mwari singer’s handlers drove to Chinhoyi and took Britto to the capital where they pampered him with goodies.

“I have reconciled with Jah Master after his team drove all the way to Chinhoyi to check on my condition and I am glad all went according to plan.

“The guys bought me some new clothes, groceries and right now they want to buy me a cellphone since they had difficulties to locate me when they came to Chinhoyi,” he said.

Britto said Jah Master deserves another chance after the fracas.

“He played his part and he showed me remorse for his actions which is commendable.

“When I was assaulted, I never thought that they would come to see me like what they have just done.

“We are now friends and I will continue listening to his music and attending his shows when he comes to Chinhoyi,” he said.

He however joked that he would not gatecrash the stage in future.

“I learnt a lesson. I won’t appear on stage uninvited in future, I now understand the consequences,” laughed Britto.

In another interview, Jah Master said he had also learnt a lesson after that incident which left him with a battered image.

“We are now friends with Britto and we want to continue doing a lot of things for him if he either quits alcohol or slows down on booze.

“He survives from piece jobs and we want to fully utilise our links to at least find him a job in Harare.

“It’s a pledge we have made to him so that he can fend for his family after we assessed the situation on the ground.

“He can change and still lead a better life,” he said.

“We are glad that at least we have tried our best to fulfil what we promised Britto after the fracas.

“We however apologise for Jah Master’s actions and we have since apologised as you can see.

“He deserves another chance after that incident,” he said.