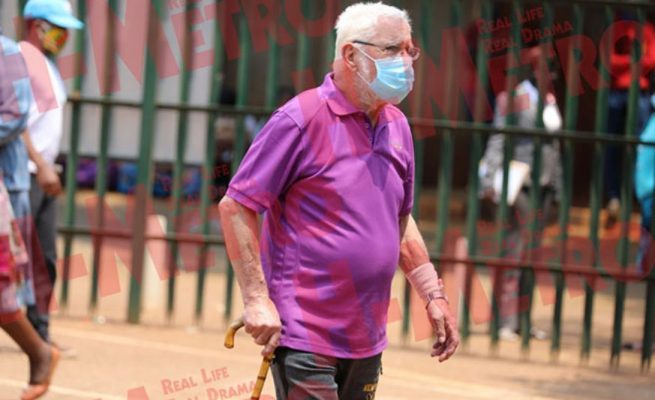 There has been a dramatic twist to the case involving a 31-year-old woman who accused her 80-year-old boyfriend of forcing her to be aroused by his dogs.

This time the 80-year-old Urs Joseph Ettillin is the complainant against the estranged girlfriend Melody Chitambo whom he is accusing of extortion after she reportedly denied him access into his Highlands home by placing a bogus soldier who was also in court yesterday to guard the house and keep him out.

Chitambo was not asked to plead when she appeared before Harare magistrate Barbra Mateko who remanded her in custody to today for bail consideration.

The court heard that sometime this month, Chitambo maliciously framed a rapε case against Ettillin leading to his arrest and appearance in court.

After being released on bail, the court heard that Chitambo denied Ettillin access into his home in Highlands.

She went on to employ Charles Mapfumo as a private security guard at the said premises. He would wear camouflage uniform during his times of duty and Ettillin made several attempts to gain access to the house but was denied by Mapfumo.

Mapfumo also appeared in court charged with unlawful possession and wearing of camouflage after he was seen by a team from military police putting on a green t-shirt written army and army black combat shoes.

Mapfumo was employed under the strictest instructions that he was not to let Ettillin into his premises and to instill fear in him so that he would not return. Matambo would enjoy complete ownership of the house.

The State represented by Lovemore Siyamunda and Ida Maromo opposed bail and led evidence from the investigation officer Tawanda Chitengu.

Chitengu told the court that Matambo is not a fit candidate for bail since she is of no fixed abode and that the address she gave to the police is similar to the complainant’s.

“The accused person is of no fixed abode, the address she gave to the police is the same as that of the complainant.

“I was surprised that she would give that address considering their relationship, the other reason why we are opposed to bail is that another case of theft involving US$75 000 was also reported against her.

“Her other accomplice Farai Matambo is still at large and we fear that if granted bail she will interfere with him and she is also likely to abscond as there is overwhelming evidence against her,” he said.