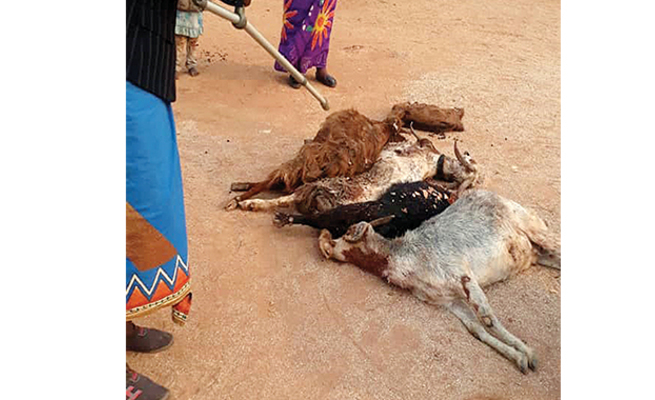 VILLAGERS in Gwanda have been urged to vaccinate their dogs, after six rabid dogs were shot down in Makwe Village, Ward 8 after they had attacked and killed goats from the area.

The Department of Veterinary Services last week vaccinated around 450 dogs from the area in a bid to contain the disease.

About 80 goats were killed by an unknown creature over a period of two months and since the rabid dogs were gunned down, the area has not recorded any other death of livestock.

Chief Mathema called a meeting last Friday where villagers from all four wards under his jurisdiction were addressed by officials from the Department of Veterinary Services on the importance of vaccinating their dogs.

“I called a meeting and villagers from the four wards under my jurisdiction gathered at Sitezi Business Centre to discuss among other matters, the issue of vaccinating their dogs. This was necessary following the discovery made by the Department of Veterinary Services following the death of a number of goats in Makwe Village.

“Villagers came across some dogs which were attacking goats and the matter was reported to the Department of Veterinary Samples who shot dead six dogs. Samples were taken for testing and results showed that these dogs were rabid. For now, the conclusion we have come up with is that the goats were being killed by rabid dogs. I then called the Department of Veterinary Services to present their report to the community and to also have their dogs vaccinated. People were advised to take proper care of their dogs and treat them as they would treat livestock as they also require chemicals,” he said.

Chief Mathema said for now the matter of the mysterious death of goats had been concluded as no more deaths were being recorded.

In an interview Matabeleland South provincial veterinary officer, Dr Enat Mdlongwa said people were supposed to vaccinate their dogs against rabies for the first time after three months and then after nine months and from there after every year. He said most villagers were however not adhering to these regulations thereby putting the lives of community members and livestock at risk.

“We vaccinated about 450 dogs in Makwe following the discovery of rabid dogs that were killing goats. Whenever we get access to vaccines we go to communal areas where we vaccinate dogs for free. As a department we sometimes face challenges of vaccines but we urge community members to buy vaccines and ensure they vaccinate their dogs. It’s really unfortunate that most people don’t stick to the stipulated time frame of vaccinating their dogs which is very risky,” he said.

The councillor of the area Rachael Ncube also confirmed that since the shooting of the rabid dogs no mysterious deaths of goats had been reported.