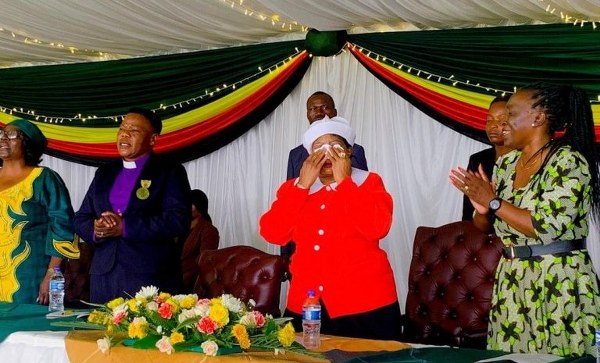 The investigating officer in the case in which Henrietta Rushwaya and four others reportedly attempted to smuggle 6kg gold out of the country yesterday dismissed the alleged bid by one of the accused to cover up the matter by dropping the names of the First Family as simply a lie and a “dirty tactic” to try and get Rushwaya released.

Detective Chief Inspector Michael Chibaya from the Police Law and Order section agreed yesterday that miner Gift Karanda who rushed to Robert Gabriel Mugabe International Airport after Rushwaya was caught with the gold, had no connection with the First Family.

“It is not in dispute that Karanda has no connection with First Family. However, people who commit such offences can use any dirty tactics to instil fear into security agents with the motive to get his or her freedom. Such dirty tactics involve name-dropping amongst others,” said Chibaya.

He was responding to questions from Mr Admire Rubaya, the lawyer representing one of the two Central Intelligence Organisation (CIO) operatives, Stephen Tserai, who are being charged with arranging for Rushwaya to go through the VIP route with minimal checks on the day she was arrested. The questioning is part of the application by Tserai and his co-accused for bail.

Tserai, through Mr Rubaya, has denied that Karanda mentioned the First Family when at the airport and said the matter only arose when the case was moved from the CID Minerals Fauna and Flora Unit to Law and Order. Tserai was alleging that “malcontents within the security services including the Law and Order department” were peddling rumours of the First Family’s involvement as a move designed to wage digital warfare against the President and his family.

Through Mr Rubaya, Tserai said the allegations were never part of the State case when they were being interviewed at the Minerals Flora and Fauna Unit and that if Karanda had made the assertion, he would have raised the alarm.

“The allegations that the gold was supposed to be brought by Collins Mnangagwa is a well-coordinated counter revolutionary disinformation tactic being peddled by security malcontents including one Detective Chief Inspector Chibaya from Law and Order and designed to wage a digital warfare against the President and his family,” he said.

“You are being used, misused, abused and overused as a pawn in this whole political chess game where there is a plot to portray His Excellency as a bad leader and cause hostility against his persona and family, leading to agitation of the citizenry to rise up against His Excellency.”

Det Chief Insp Chibaya, in his response, said it was malicious for Tserai to portray an image of law enforcement agents who sought to cause anarchy and despondence in the country by soiling the name of the President and his family.

“This is a lie. This is a case with its facts which brings about this charge with enough witnesses who will testify during trial.

“However, I feel it is malicious for the defence counsel to portray a picture as though the police in particular and other security sectors are intending to cause anarchy and despondency by soiling the image of His Excellency and his family. This is a position being taken by defence counsel with intentions to save his clients at all cost,” he said.

Tserai is appearing in court along with Rushwaya, Pakistani businessman Ali Muhamad, security agent Raphios Mufandauya and miner Karanda on smuggling, illegal possession of gold, criminal abuse of office and obstructing the course of justice

Ali Muhamad, who is being represented by lawyer Mr Tinashe Robin Tanyanyiwa (Snr), disowned Rushwaya, saying he had no links with her.

He told the court that he was never found in possession of any gold after the police conducted three searches on separate occasions at his Belvedere house in Harare.

Mr Tanyanyiwa (Snr) said there was no one among his co-accused who ever implicated him in the smuggling bid.