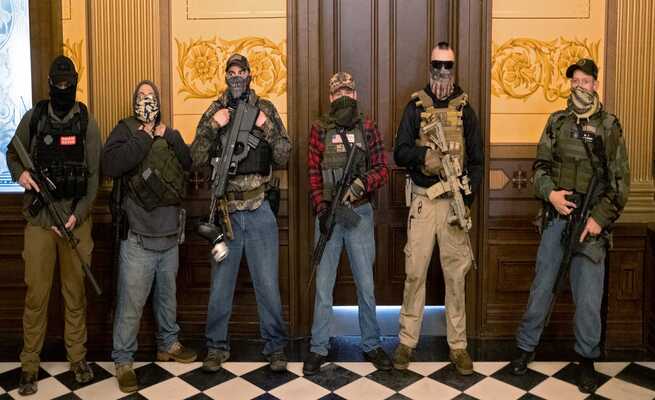 Donald Trump supporters – some armed with rifles and handguns – have descended on election counting centres where mail-in ballots continue to be tallied up.

In the state of Arizona, a mostly unmasked crowd chanted “stop the steal” following unsubstantiated claims that votes for the Republican president were deliberately not being counted.

A reported 300 protesters – some of who were armed – rallied in front of the Maricopa County Elections Department in Phoenix on Wednesday night as Democratic presidential candidate Joe Biden held a razor-thin lead in the critical battleground state.

There are currently six states still to declare a winner – Arizona among them – with the president’s path to power now appearing slightly tighter.

Chris Michael, 40, from Gilbert, Arizona, said he came to the election centre to make sure all votes were counted.

The 40-year-old said he wanted assurances that the counting was done “ethically and legally”.

Observers from both parties were inside the election centre as ballots were being counted, with it being livestreamed online throughout.

Two county officials – one Democrat and the other Republican – issued a joint statement expressing concern over misinformation spread about the integrity of the election process.

Clint Hickman, the Republican chairman of Maricopa County Board of Supervisors, and Democratic supervisor Steve Gallardo said: “Everyone should want all the votes to be counted, whether they were mailed or cast in person.

“An accurate vote takes time. This is evidence of democracy, not fraud.”

Trump supporters also showed up at counts in neighbouring Nevada. According to local media reports, about 75 people turned up in Vegas waving Trump flags and chanted “stop the steal”.

Elsewhere, in Michigan, dozens of Trump-supporting “stop the count” protesters rallied outside another election counting centre in Detroit.

Demonstrators vented their anger before Biden was finally declared as winning the state.

Video from the count centre showed frustrated crowds outside the vote centre and inside its lobby shouting “let us in”, with police lining up to keep them from storming the counting area.

In New York City, hundreds of counter-protesters in Manhattan called for every vote to be counted. It was largely peaceful, but 20 arrests were made after a smaller group began protesting police misconduct.

The demonstrations come as the Trump campaign said it filed lawsuits in Pennsylvania and Michigan to demand better access to locations where ballots were being processed and counted.

It also called for a temporary halt in the counting of votes in both states and asked for a recount in Wisconsin, where Mr Biden has already won.

News Cynthia Goba - 24 November 2020 0
COVID-19 is ripping through educational institutions in the country with latest statistics showing that more than 150 learners and teachers at schools and colleges...
Loading...