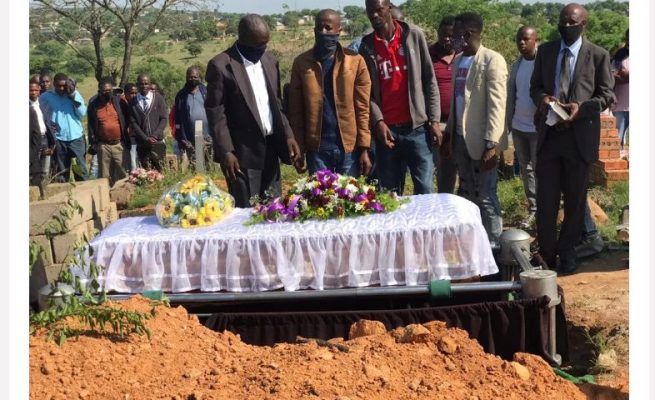 MOURNERS gathered to pay their last respects to S’fiso Mabaso (30), who was stabbed to death allegedly by the mother of his three-year-old daughter.

He was laid to rest in Oakley Village, outside Mkhuhlu near Bushbuckridge, Mpumalanga, yesterday.

His aunt Linah Nkuna (58) described S’fiso as a loving and caring father.

“He loved his family and fellow villagers. He’ll be sorely missed,” said Nkuna.

S’fiso was a guard at a local clinic in Oakley Village. He was allegedly killed by the woman at Teka Mahala Village last Sunday.

“We’re struggling to come to terms with his untimely murder,” said Prophet.

“He was beginning to change the situation around for his daughter and wife, and was supportive of the woman’s family.”

He said S’fiso was killed on pay day over his bank card.

Police spokesman Colonel Donald Mdhluli said: “Police and medical personnel were notified of a man who was stabbed at Teka Mahala, Sondela Village in Mkhuhlu. The man was found lying in a pool of blood.

“He was certified dead by paramedics at the scene. The victim had a stab wound.

“Police opened a case of murder. A woman (29) was arrested.”

The suspect is facing a murder charge. The case was remanded until 19 November for a possible bail application.