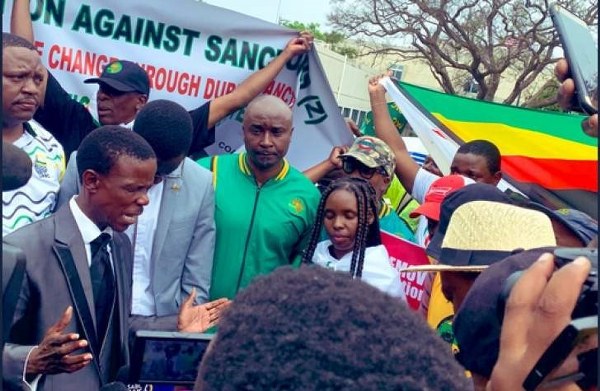 FOR WEEKS Mboro has been saying foreign religious leaders are out to harm him for standing up for the people.

And now one of those religious leaders has come out to confirm it – and physically attacked Mboro.

PROPHET NANA POKU HAS ADMITTED HE WAS BEHIND THE ATTACK!

Prophet Nana Poku, leader of the Kingdom Prayer Ministry International in Rustenburg in the North West, took to social media and admitted he was behind the attack at the Pretoria Magistrates Court.

Paseka “Mboro” Motsoeneng, leader of the Incredible Happenings Church, said he’d lay a charge against Poku this week. He wanted to see Poku’s church close down.

“Nana Poku is a fake prophet. People like him shouldn’t have churches in this country. Their churches are havens for criminals.

Mboro, president of the Church Mandate Turn Around Movement, said Poku organised izinkabi in and outside the country to kill him.

Nana Poku has admitted he wanted to slap the widely-respected man of God around a bit.

Addressing Mboro in a video on Facebook, he said: “If it wasn’t for those bodyguards, I’d have beaten you. You’re too small. If I see you anywhere I’ll beat you again.”

He made fun of the fact that Mboro ran away when he tried to attack him, but Mboro said: “I never ran from this boy. I’m not afraid of him.”

Mboro has upgraded his security. He said he’s fighting for the whole of Mzansi.

“Nana Poku’s church in Rustenburg must be closed until his cases are resolved,” said Mboro.

He was angry the Bushiris went to talk peace.

“Who is he in Bushiri’s life? He shouldn’t be entertained.”

Mboro said: “This fake prophet kisses his congregants and claims he’s heal them. That’s not Christianity.”

Daily Sun in the past reported on how Nana was bust on allegations of raping a 15-year-old in a church in Soweto, and how he was caught in his car with his annointed hands all over a magosha during lockdown in Rustenburg.