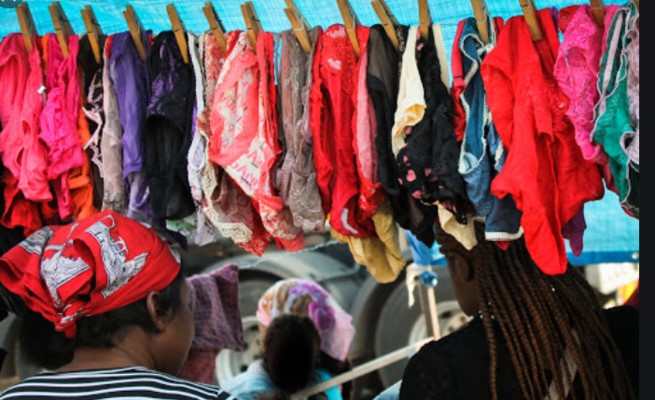 ZIMBABWEANS mainly in urban areas are relying on second-hand undergarments smuggled into the country and sold at flea markets across the country as economic hardships continue to take a toll on the population.

This was revealed in an audit report by the Auditor-General Mildred Chiri which monitored the quality of goods imported in the country by the Industry and Commerce ministry between 2013 and 17.

According to the report, hard-hit Zimbabweans have resorted to buying second-hand undergarments and clothes being smuggled into the country.

In her report, Chiri said the Industry and Commerce ministry was not adequately monitoring the smuggling of substandard goods, leading to the proliferation of the second-hand undergarments and clothes which is having a negative bearing on the clothing industry in the country.

“Audit also noted that second-hand clothes and undergarments were being smuggled into the country and sold at designated flea markets such as Mupedzanhamo in Mbare (Harare) and Chinotimba Flea Market in Victoria Falls. My visit to Mbare revealed that there were 10 warehouses which were packed to capacity with bales of second-hand clothing,” part of the report read.

She also said there was rampant smuggling of goods along the borderlines, entry points and through transit fraud due to lack of monitoring.

“Smuggling syndicates have mushroomed at Zimbabwe’s busiest ports of entry and along the borderlines after government’s enactment of Statutory Instrument 64 of 2016 (repealed by SI 122 of 2017), Statutory Instrument 19 of 2016, Statutory 150 of 2011 which imposed restrictions on imports of basic commodities, second-hand clothes and banning of undergarments,” she said.

Chiri, however, noted that in an effort to control the influx of cheaper products which was directly affecting local producers, the Industry and Commerce ministry introduced SI 64 (repealed by SI 122 of 2017).

“According to the inspector responsible for anti-smuggling monitoring at Beitbridge Border Post, the introduction of SI 64 necessitated the establishment of an inter-ministerial committee on border management. The role of the inter-ministerial committee is to facilitate identification, prosecution of smuggling offenders and to enable intelligence and security surveillance.