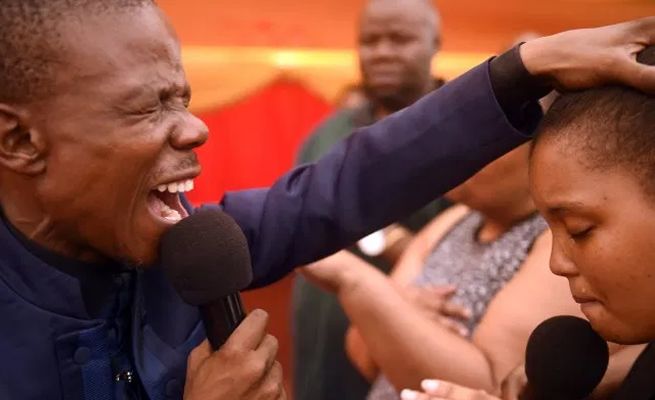 PROPHET Paseka “Mboro” Motsoeneng might not be his favourite person, but Prophet Nana Poku has denied that he wants to kill him.

“Like I said before, whenever I meet him I will beat him up, but as to kill him, it’s a no,” said Poku.

“What would I gain from killing him?”

The leader of Kingdom Prayer Ministry in Rustenburg, North West, told the People’s Paper he heard Mboro said that he put muthi at his place.

“I live in Rustenburg. I don’t have time for games,” he said.

“You think I’d leave my home here to bewitch someone in Gauteng. I’m not mad.

“I wouldn’t go all the way to Ghana to waste my spiritual powers on killing Mboro.

Poku said that Mboro was a joke and he shouldn’t be taken seriously.

“He is after fame. He is jealous. When Mboro sees another pastor or prophet doing well, he wants to destroy them. That can’t happen.”

Poku said Mboro was afraid of him.

“He ran like a baby when I approached him in court.

“Why would I want to kill someone who fears me?

“I don’t kill and rap_e people. Mboro got his facts wrong.

“I’m waiting for court on that one. The truth will prevail,” said Poku referring to rape charges he faces.

Mboro said he wasn’t afraid of Poku and his Ghana powers.

“He cannot do anything to me. I’m not the dying type,” he said.

“I’m going to help all his victims get justice. He is a fake prophet.

“People like him shouldn’t be allowed to have churches in this country,” said Mboro.

“Their churches are havens for criminals.”