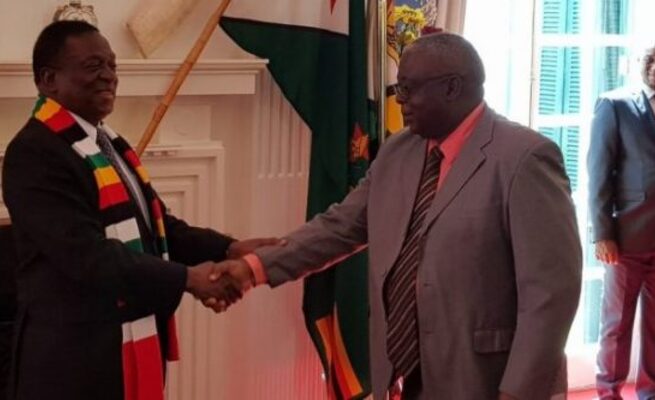 The Thokozani Khupe led MDC-T Masvingo province has nominated Elias Mudzuri as their presidential candidate for the forthcoming extraordinary congress slatted for December despite there being an internal memorandum to all provinces from secretary general Douglas Mwonzora stopping all nomination processes.

The shelving of nomination processes by Mwonzora has drawn scorn from the MDC-T extraordinary congress delegates and members of the National Council of Masvingo province who view the move as the biggest betrayal to the democratic principles and values of the party.

At a press conference held last weekend at the party’s provincial headquarters in Rhodene, MDC-T delegates led by de facto chairperson Festus Dumbu said that they would want to be given a chance to choose their own candidate and not be dictated upon by either Mwonzora or Khupe.

The resolutions had initially affirmed support for Mudzuri before being edited to leave out the name of their preferred presidential candidate. Dumbu, however, told TellZim News that they had a candidate whom they wanted and no one will rob them of a chance at nomination.

“We have our own candidate whom we would like to nominate once given a chance. We will not put the name in our resolutions at the moment but we do not want people who go against the National Council resolutions.

“The nomination process is not in the constitution but it is a decision which was made by the National Council thereby making it a policy which must be followed. No one individual has the power of going against the National Council resolution be it Mwonzora or Khupe,” said Dumbu.

The Dumbu-led team said it had full rights to participate in the nomination process to choose the late Tsvangirai’s successor as a province and would not be bullied by power-hungry fraudsters.

“We call upon all members of the MDC to peacefully and vigilantly act now to save our revolution from the jaws of power-hungry fraudsters threatening to derail our movement by rigging their way to power.

“We owe this not only to ourselves but to our children, the country and indeed to the undying spirit of Tsvangirai.

“We reject the planned abuse of the online National Council nomination process aimed at ensuring that certain members of the Standing Committee fraudulently put themselves into positions they prefer, ahead of other deserving cadres.

“We are shocked that the Standing Committee thereafter resolved to abandon the traditional practice of nominating candidates by provincial councils in favour of an opaque virtual process by the National Council whose composition is not known and whose sole purpose is to advance the interests of some candidates.

“Masvingo has learnt of this intended unconstitutional crude plan to convene a National Council for the purpose of selecting only two persons who will then be allowed to contest at the forthcoming Extraordinary Congress for the position of president of the MDC-T Party,” reads the resolution document.

Masvingo has raised concerns over the flawed Bulawayo nomination process saying they were done without following proper procedure.

“The Bulawayo nomination process of November 8, 2020 was grossly flawed and chaotic. It was held before the establishment of an Electoral College and a properly mandated Independent Electoral Management Board (IEMB) approved by both the National Executive and National Council as required and mandated by the resolutions passed by those structures in the last meetings held by them.

“Masvingo province will always be committed to democracy and constitutionalism and to ensuring the extraordinary congress processes are transparent, free, fair and credible.

“The Bulawayo provincial nominations should therefore be declared null and void. The MDC extraordinary congress becomes a great opportunity to show the whole world that we are a movement ready to manage all the internal and national democratic processes which will usher real change as desired by the people of Zimbabwe,” reads the resolution document.