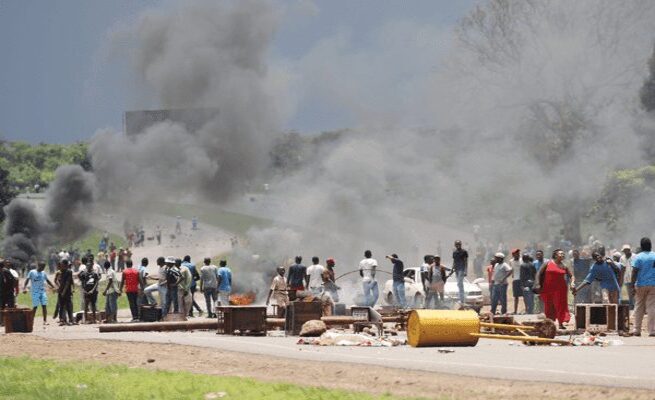 THE MDC Alliance has dismissed State reports Tuesday linking a party official to a plot to burn government buildings.

The claims carried by the Herald newspaper were based on a leaked audio linked to unsettled MDC Alliance Bulawayo provincial Women’s Assembly chairperson Tendai Masotsha.

According to the publication, Masotsha threatened her party with the act if it persisted with its internal investigation into her alleged involvement in the abduction and torture of student journalist Tawanda Muchehiwa.

“I, Tendai Masotsha, would like to say unless they want the whole family to be in soup, if they corner me, I will reveal everything that Tawanda wanted to do on that fateful day,” says the voice in the audio which the state media links to the opposition official.

“Tawanda told me that he had 20 people who were waiting for instructions to burn government buildings. Tawanda received money to buy explosives to burn down those buildings.

“Amongst those 20 people, I did not see them (the 20 people), he was telling me that they were ready and he was pushing me to find a safe house and convince the chief to buy them food while they were carrying out their activities.

“Unless if they want me to go public and tell the world that I was also afraid of what I was being asked to do, Tawanda knows that he wanted to burn government buildings. I told (Jameson) Timba that if they continued to harass me, I am going to expose everything.”

However, MDC Alliance, through its twitter handle on Tuesday dismissed the claims, saying these were a poor spin by the state-controlled publication.

“The MDC Alliance has never plotted to bomb buildings nor to carry out any unconstitutional activity. This is poor spin by@HeraldZimbabwe.

“We continue to demand justice for @TeeMuchehiwa, the MDCTrio, Tatenda Mombeyarara, Itai Dzamara & all victims of state-sponsored abductions.” Tweeted the MDC Alliance.”

Government spokesperson Nick Mangwana also commented on the audio stating that the threat of violence to intimidate government shall not be tolerated.

“We are talking of very serious allegations of terrorism here. This is not the Zimbabwe we want. This is not how democratic disputations should happen. An unlawful use of violence against property to intimidate or coerce Government is a crime never to be tolerated,” he said.