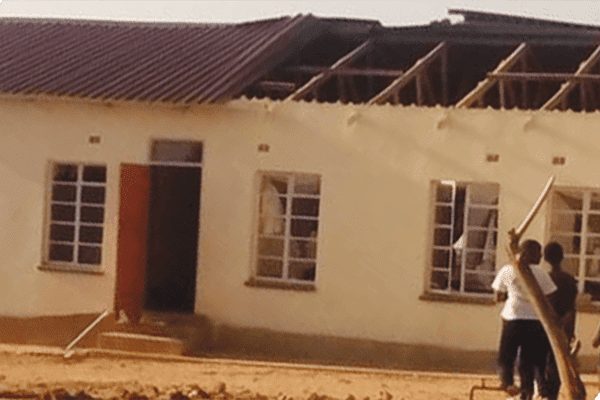 Nine people, including six pupils at Chironde Secondary School and a toddler, were injured after a hailstorm blew off classroom blocks and homesteads roofs  in Shurugwi.

Chironde Clinic also had its roof blown off after the hailstorm in Shurugwi North on Wednesday afternoon, with at least 11 houses reported to have been damaged.

Shurugwi District Development Co-ordinator Mr Langton Mpeta yesterday said three of the injured pupils and a villager were still in hospital, while others were discharged.

He said the District Civil Protection Unit, was on the ground.

“There was a violent hailstorm in Chironde area under Chief Nhema on Wednesday and we had six pupils at Chironde Secondary who were injured after roofs on three blocks at the school were blown off by strong winds,” said Mr Mpeta.

“There were also two women who were injured in Chironde village including a toddler.”

“We also had Chironde Primary School and Chironde Clinic which were affected by the hailstorm. Several houses belonging to villagers in the area were also affected.”

Mr Mpeta said stationery was drenched at the school where other valuables worth thousands of dollars were lost.

“Currently, we are working on how best to assist some villagers who were left homeless.”

Chief Nhema said: “The majority of the affected villagers are still sleeping in the open while some have erected temporary structures.

“We are appealing for help from the Government so that the affected villagers can quickly get decent shelter.”

Local Member of Parliament, Cde Rabson Nyathi, said he was mobilising resources for the affected villagers.