A church counsellor has been shamed for trying to lure a church mate’s wife.

Madzibaba James Nyore, 52, popularly known as ‘Musadare’ – a counsellor at Johane Masowe YeChishanu – was trapped by DJ Owen ‘Ollah 7’ Madondo and his wife Chipo Kuyengwa, 26, after demanding se_xual favours from the latter. 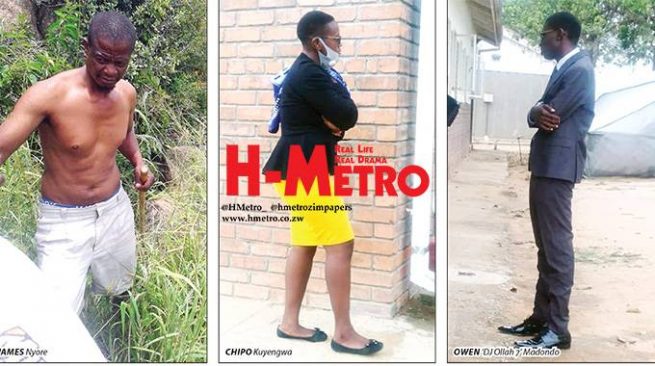 This is after he had mediated in their domestic disputes.

Contacted for comment Nyore said he was in custody at St Mary’s Police Station after assaulting Madondo who had taken his relatives to the former’s house over the love messages.

“I do not want to say anything maybe the magistrate will decide when I get to court since I am now in police custody,” said Nyore.

Chipo showed H-Metro how Nyore tried several times to lure her for se_x before she exposed the latter’s dishonesty to Madondo leading to a trap.

Nyore was bashed at a lodge where he wanted to bed Chipo while promising to disclose Madondo’s shenanigans behind the wife’s back.

“It was on the 6th of November this year when he approached me saying he had something secret he wanted to share with me concerning movements of my husband and I agreed.

“On the 10th of November he called me to enquire if I was free to see him for the issue he wanted to share with me and I agreed.

“One of the days he visited us and my husband asked me to drive him to his house since he was about to leave for work not knowing that Nyore had a dirty mind about me.

“Nyore went on to send messages demanding se_xual favours and that is the time I realised that he had no story to tell but wanted se_x.

“I disclosed this to my husband and showed him all the messages he had been sending and we agreed to trap him.

“I agreed to meet him and he took me to a lodge while my husband was following and this is how we exposed his shenanigans,” said Chipo.

Madondo confirmed the story yesterday saying Nyore was arrested for assaulting him together with his son Tatenda Nyore who is on the run.

“I want to thank my in-laws for a faithful wife and thank my wife Chipo for being faithful when my go between and church counsellor decided to sell the trust I gave him.

“Nyore has been a good man to me and he is the one who was the go between when I paid lobola, kana pamusha pake paCheza apa kuDomboshava ndakasvika naye.

“After trapping him I led my family to his house for discussions and he took his walking stick he uses at the shrine and assaulted me together with his son Tatenda after we exposed his shenanigans to his wife.

“I lodged a police report against him and is expected to appear in court tomorrow (today) and his daughter Kudzai is sending threatening messages over taking the case to police,” said Madondo.

Nyore’s wife was in tears and could not say anything about the matter.