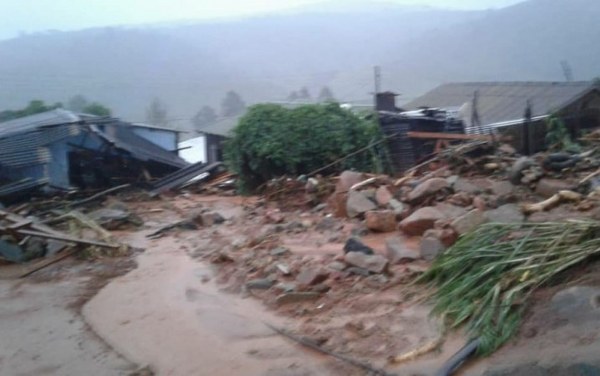 Heavy rains that have been pounding Masvingo over the week have left a trail of destruction at Chingwizi in Mwenezi where nearly 40 families had some of their houses obliterated by the incessant downpours.

This comes as the district Department of Civil Protection (DPU) has already sent an appeal to development partners to assist the affected families with tents for temporary shelter together with clothing and food.

This morning, a team comprising Mwenezi DCP and Care International visited Chingwizi to ascertain the full impact of the destruction and means of mitigating the disaster.

There were fears that more houses might give in unless the heavy downpours subside amid calls for well wishers to chip in with food and tents.

Ms Chingwe disclosed that Government and its partners would assist the affected families in the wake of the destruction.

“There are 39 households that were affected by heavy rains which saw some houses being destroyed. We are still carrying out assessment to determine the full range of the damage and cost. Our teams are working on that issue right now but we are appealing to well-wishers and development partners to intervene,” said Ms Chingwe.

“We have send an appeal to organisations such as Care and Red Cross for them to assist and at the moment, we cannot tell whether there have been some who were left completely homeless.”

She appealed to communities in Mwenezi to build standard houses that were not susceptible to destruction by heavy rains.

“We are also calling on our people to make sure they build strong structures because it now an open secret that Mwenezi is exposed to flooding and strong winds that destroy houses every year leaving some homeless.”

Most houses across Mwenezi are built from pole and dagga and such structures can hardly withstand strong winds and incessant heavy rains risking life and limb of people especially during the rainy season.

Families at Chingwizi were relocated from the Tugwi-Mukosi basin in Chivi to pave way for Zimbabwe’s largest inland dam in early 2014.

The relocation marked arguably the biggest ever mass evacuation of people in post independent Zimbabwe with the families getting compensation from Government to rebuild their homes.

However, the majority of the families have largely failed to build standard homes, six years down the line, citing shortage of resources.

Masvingo has been at the receiving end of heavy rains that have precipitated ephemeral floods in some areas forcing the DCP to surge communities especially in low-lying areas to be on high alert.