A family in Kanuni, Igembe South, was left in shock after their kin appeared at his own burial.

Osca Mithika aged 23, returned home on Thursday, December 3, expecting a warm reception from the family only to find that his own burial preparations were ongoing. 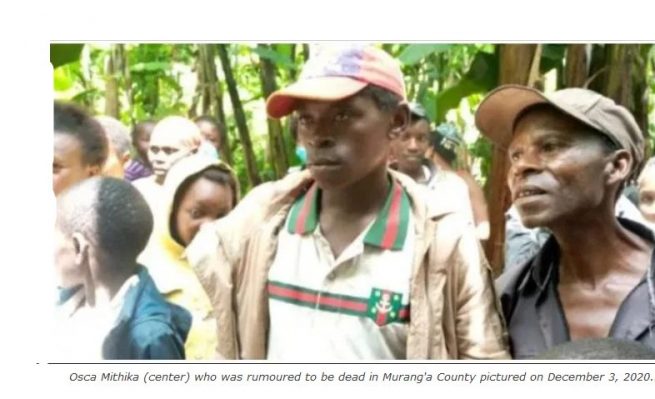 Mithika’s mother, Regina Choa, stated that it took a lot of courage for her to approach her son after everybody vanished upon seeing him return home.

She noted that the family believed that their kin had drowned two weeks ago.

“We could not believe our eyes when we saw him. Everybody scampered for safety. People fled and some fell because we had already mourned him.

“I was trembling as I got closer to him to ensure he was really alive because we thought we recovered his body from River Urra,” Choa spoke to a local media house.

Opening up on the incident, Mithika noted that he had left home to look for casual jobs at Mutuati in Igembe North.

The family reported the matter to the police after the disappearance, prompting a search.

The family would later be called to the Nyambene level Four Hospital Mortuary to identify a body that had been discovered in the river. The family is said to have positively identified the body as that of Mithika. According to the area chief Japhet Kaindiria, the family had already spent KSh16,000 on the burial preparations.