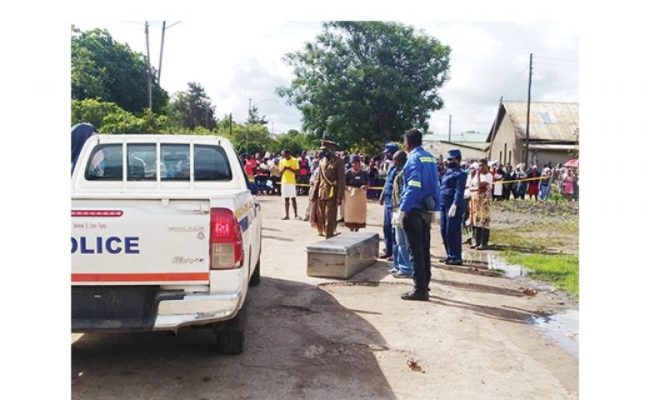 A dark cloud hung over Mtapa high-density suburb in Gweru yesterday as residents tried to come to terms with the tragic death of 12-year-old girl, Natasha Manunure, on Tuesday afternoon after she was struck with a stone by a man suspected to be mentally challenged.

Natasha met her fate as she walked home from Sandara Primary School where she had just written a Grade Seven General Paper exam.

Police said the girl died on the spot as passers-by vainly tried to administer first aid treatment as she bled profusely from the head where she was struck.

Recovered at the scene was a blood-stained Agriculture past examination paper the girl was said to have been concentrating on when she was struck from behind.

A witness, Mr Sydlen Chimalizeni, who resides at a house close to where the incident happened said he heard a sharp scream and went out to investigate.

He said he saw Natasha lying on the ground groaning in pain.

Mr Chimalizeni said in the distance, he saw the alleged killer, identified as Derick Musekiwa, running away from the scene.

“I knelt down intending to render some first aid on the girl, but before I knew it, some white foam started coming out of her mouth,” he said. “There was a lot of blood all over the scene.”

Mr Chimalizeni said Musekiwa was a well known mental patient who was notorious for assaulting and pelting people, especially girls and women in Mtapa and Mambo suburbs.

Natasha’s grandmother, Mrs Sophia Zivanai, yesterday said she was devastated that her granddaughter who had a bright future, died under such circumstances.

“I’m so hurt and I am in pain,” she said. “How could this happen to her. It’s not the first time that this mentally challenged man has been on the wrong side of the law and it’s unfortunate that this has happened to my granddaughter.

“We have lost an intelligent child and we are yet to decide on the funeral arrangements.”

“I stay in Mambo and when I heard that there was a child who had died after being struck by Derick with a stone, I rushed here,” she said. “I know this family and I knew the girl. This Derick is a nuisance and we have been living in fear of him.”

Another resident, Mrs Shaylee Jambayo, said two weeks ago, her grandchild was struck on the right shoulder with a stone by Musekiwa.

She said she reported him to the police.

Natasha’s brother, Marvelous said it was a dark day for him and his family after losing a sister who had a bright future.