INFORMATION permanent secretary Nick Mangwana has sparked a row with government critics through suggestions that some ministers and other top government officials who have succumbed to Covid-19 could have been deliberately killed by opposition ‘activist’ doctors.

He was responding to a thread on twitter on Sunday.

Mangwana said, “l followed that. This is what’s leading to the unfortunate conspiracy theories that there are certain political players being eliminated in hospitals by political activists hiding behind medical qualifications.”

Zimbabwe has seen four serving government ministers, a former minister, an ex-legislator, some Zanu PF officials and former soldiers all succumb to the pandemic since July last year.

Except for Gwaradzimba who was buried on Wednesday, the others are yet to be buried.

Hundreds more ordinary Zimbabweans continue to die from the disease.

Mavhinga accused the top government official of being reckless.

“This is reckless propaganda and baseless innuendo against the medical profession coming from senior government official is very dangerous. You cannot combat the Covid-19 pandemic with propaganda,” he said.

“For a former nurse, secretary Mangwana displays pedestrian thinking. He and his chums were openly violating Covid-19 rules as if they were special. They were holding useless meetings and parties. Now he is peddling conspiracy theories and looking for scapegoats among doctors and nurses.”

The incidence of death visited upon the Zanu PF establishment through Covid-19 has unsettled Zimbabwean power corridors with Mangwana claiming this was not a coincidence. 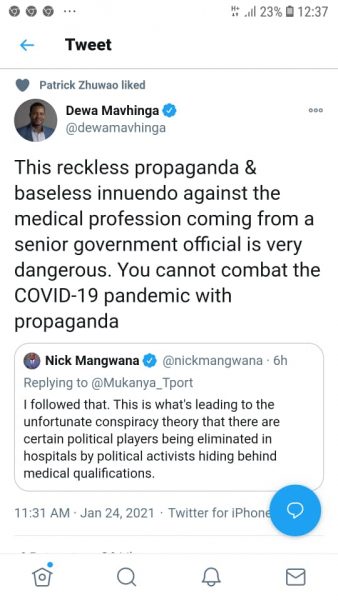