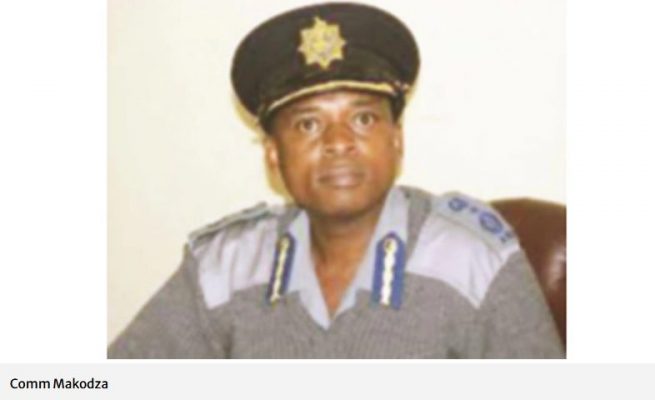 OFFICER commanding Matabeleland North Province, Commissioner Erasmus Makodza was yesterday arrested for abuse of office after he allegedly he imposed his girlfriend, Maonei Chapfudza, as an investor to partner with the Zimbabwe Republic Police (ZRP) in several horticultural projects in 2019.

Makodza was nabbed by the Zimbabwe Anti-Corruption Commission (Zacc) for the alleged offences, which he allegedly committed while he was still the Officer Commanding Mashonaland East province.

He is beng charged under the Criminal Law (Codification and Reform) Act for allegedly concealing from his principals in the ZRP, his personal interest in a transaction.

Although Makamure did not disclose the charges, it is alleged that Makodza imposed his girlfriend, Chapfudza, as a private investor to work in partnership with police on a farm in Marondera, which belongs to the ZRP, in several horticultural projects.

It is further alleged that Makodza has a child with Chapfudza.

According to the memorandum of agreement signed between the commissioner and Chapfudza, of 20716 Cranebrooke, Ruwa, in 2019, Makodza said he was duly authorised to enter into the agreement.

“Memorandum of joint venture agreement made and entered between Zimbabwe Republic Police, Mashonaland East province, an operational province within the Zimbabwe Republic Police whose address is Mashonaland East Provincial Headquarters, Marondera and herein represented by Officer Commanding Mashonaland East Province Commissioner Makodza Erasmus, he being duly authorised thereto (hereby referred to as ‘first party’.) And Maonei Chapfunga of 20716 Cranebrooke, Ruwa, contactable on 0774 336 265 or 0732 336 265 (hereinafter referred to as the ‘second party’,” read part of the agreement entered into by Makodza and his alleged girlfriend.

The police is supposed to receive 10% of revenue from her on every project.

Since they entered into the agreement, Chapfudza allegedly engaged in a chicken project, and farmed maize and potatoes.

She is also said to have ran butcheries and recently, is said to have used the partnership and Makodza’s influence to buy 25 cattle from the police at a low price of around US$150 per beast.