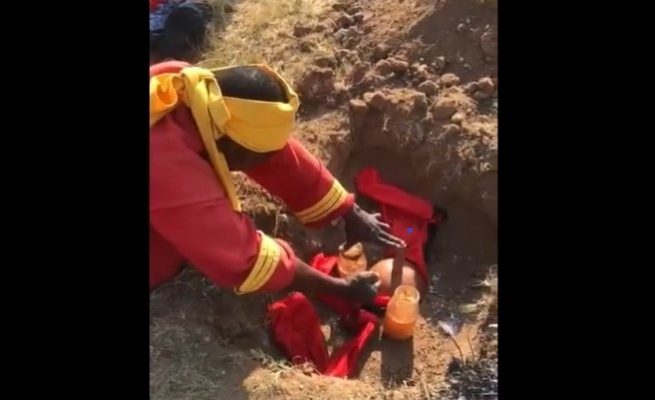 HIS family was troubled by a witch doctor for several years.

But Mandla Ngidi (34) from Woza Willage in Maphumulo, KZN is now hopeful better days are coming for them.

This comes after inyanga Ncane Mkhize from Vosloorus, Ekurhuleni visited the family on Saturday, 6 February and dug up several items in the yard.

The items, which included a knife wrapped in animal carcass, plastic containers filled with muthi and a clay pot filled with underwear, were allegedly buried by a witch doctor.

Mandla said he had never seen such a thing in his life. He said he was aware something was happening in his home, but couldn’t find a good sangoma to help him.

“I’ve lost several family members in a manner that left us with many unanswered questions. My mum was the latest to die in July last year. I consulted several izangoma over the years and they told me where the problem was, but were unable to help cast it out,” he said.

“In January, my wife started getting seriously sick. It was so bad she had to move back to her parents’ home. That’s when I decided to consult this nyanga.”

He said inyanga Mkhize put out empty dishes in the yard sprinkled with his muthi and told them to wait a few hours before checking what his muthi collected. “To our surprise, we found the dishes overflowing with all these shocking items.”

Mkhize said witch doctors used underwear in their muthi for many reasons. “In this case, the witch doctor wanted the owners of the underwear not to have babies. When I enquired from the family members who had identified their long lost underwear, it turned out they never gave birth again since their underwear went missing,” said Mkhize.

He said among the underwear they found buried, one belonging to Mandla’s three-year-old son.

Mandla said his son’s underwear went missing in December. Mkhize said he’d be in constant contact with Mkhize to ensure his home was safe from the witch doctor’s future deeds.