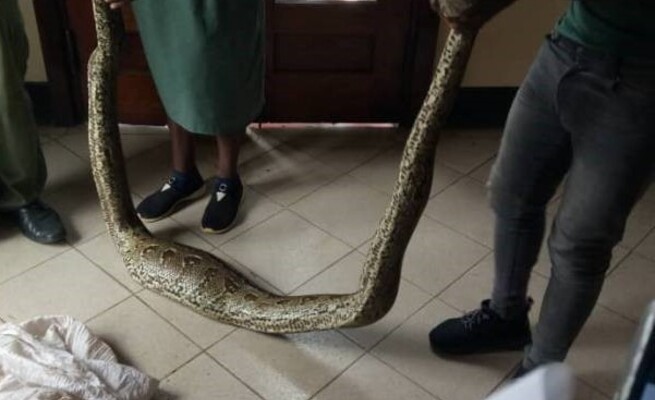 The deadly constrictor was discovered by hospital staff who believed it sought refuge in the facility to escape from the heavy rains that pounded the area the night before.

Strangely, the incident which left patients mystified, comes barely three weeks after a huge crocodile invaded a male ward at the same hospital.

The presence of the two reptiles has left people wondering how they found their way into the hospital yard which is in the middle of the town, with the more superstitious residents quick to suggest the python was either “owned” by one of the patients admitted at the hospital or someone who was using juju (black magic) who died at the same hospital and left behind his or her tools of the trade.

National Parks and Wildlife Management spokesperson Tinashe Farawo told NewZimbabwe.com that he was yet to receive report on the incident.

“I am yet to receive the report but let me just check where the python was taken to after it was captured,” he said.

Stray animals also frequently escape from nearby wildlife sanctuaries which include the Gonarezhou National Park, Malilangwe Trust and Save Conservancy.