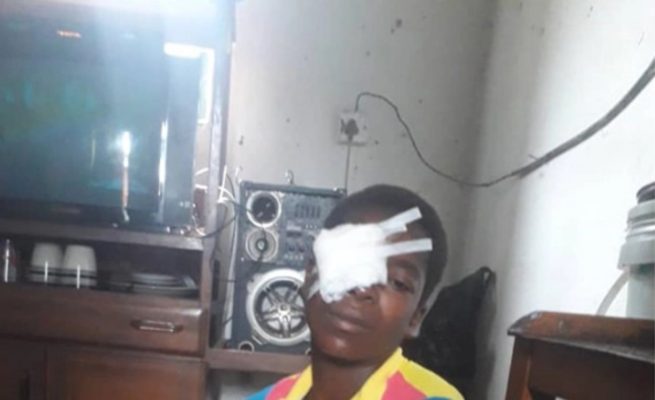 A Honde Valley man reportedly plucked out his wife’s eye after an altercation over alleged “lack of respect” from the wife.

Barnabas Zarurayi attacked Tsitsi Mabwedza for failing to treat him as her husband. He also went on to soil himself in the bedroom boasting that the house was his.

The incident occurred on Tuesday afternoon and no police report has been made.

The pair has been married for 14 years and blessed with five children.

Tsitsi narrated the incident to H-Metro.

“I told my husband to remove his shoes when he was about to sleep on the bed so that he doesn’t make the blankets dirty and he ignored.

“After that he started using the bedroom as a toilet and when I noticed that I tried stopping him and he said it was his house and no one could tell him what to do.

“I told him that he was not a responsible man because I was providing everything and his duty is to eat; he then started beating me,” said Tsitsi.

She added: “I was thrown on walls. I tried to run away and he caught me and started hitting my head on stones resulting in my eye being plucked out.

“I felt the pain and the best I could do was to scream for help,” she said.

The pair had a previous altercation which prompted them to stay separately for months.

A witness, Mai Tafadzwa, who helped to calm the fight said:

“I heard Tsitsi screaming for help and when I arrived Barnabas was beating his wife aggressively, pushing her to the walls.

“After I stopped the fight I went home, without the knowledge that the fight would continue.

“To my surprise today I heard that Barnabas removed his wife’s eye yet I thought I had stopped the fight,” she said.

“My wife is trying to overtake me forgetting that I am the head of the house and I own this house.

“I don’t remember some of the things which happened to me. I don’t know where the power came from and what I remember is when I said, ‘vadzimu vangu vasvika’ and we started fighting.

“Later on I was surprised to see my wife’s eye bleeding, then I moved away.

“The problem is I don’t want people who make me angry, because when I get angry I am not able to control my anger,” said Barnabas.

Another witness said: “Barnabas came from work and passed through the muddy road due to these rains.

“So his wife told him to remove his shoes which were dirty and he started boasting that no one should tell him what to do in the house.

“He later on urinated in the bedroom and all over on the floor before the wife confronted him leading to a fight.

“So the wife further told him that he was only a man in the blankets and he was irresponsible.

“That provoked Barnabas leading to the fight.

“He used his fists and hit her head against the stones,” said the witness.

Tsitsi’s mother tried to fight Barnabas after she confronted him following the assault but could not overcome him.

Surprisingly, no police report was made and the couple is still together.