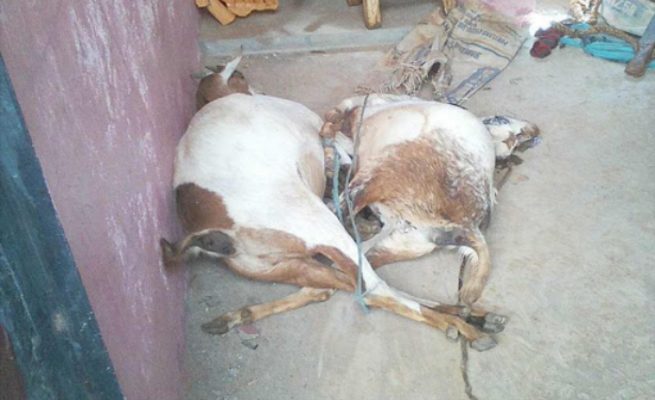 THE TWO goats were supposed to be sacrificed at thwasa Jabulile’s graduation ceremony.

But early yesterday morning her gobela made a discovery that will haunt them for the rest of their lives.

EVIL PEOPLE HAD KILLED THE GOATS, SMEARED THEM WITH MUTHI AND DISAPPEARED INTO THE NIGHT.

Sad gobela Trust Mathebula (23) said she discovered the evil doing yesterday at about 4am when she went to the outside toilet within her yard.

“The two goats were tied with rope outside the house for the graduation ceremony,” she said.

“But we found the dead goats lying in a pool of blood. They’d been stabbed in the neck and stomach.”

She said when she went outside she saw three men in the street next to her fence, but they ran away.

“The evildoers had sent them to test my strength, provoke and embarrass me. I’ve overcome the battle,” said Mathebula.

She said she bought thwasa Jabulile Dube (18) other goats from her own pocket.

“Jabulile was deeply stressed and weeping because of the incident.

Jabulile from Tsakane in Ekurhuleni said she was happy when she finally graduated as a healer after she spent almost 12 months in training.

“It was terrible seeing the two dead goats,” she said.

“I was worried I might have to spend another year training.

“But I’m thankful to my gobela. She’s a true healer with a good heart.

“She bought me the goats because I didn’t have enough money.”

She said her mother didn’t work and she’d struggled to find money.

“I’ll have to work hard at my indumba when I get home,” she said.

“I’m completing my matric as well after dropping out due to my ancestral calling.”

“But the gobela’s ancestors are strong and the evil attacker’s muthi was too weak to kill either the gobela or the graduate,” said Ndlovu.

Ndlovu advised them to do a cleansing ceremony to protect themselves and the home against all evil.

“People must stop tampering with other people as this could come back to haunt them,” Ndlovu told Daily Sun.