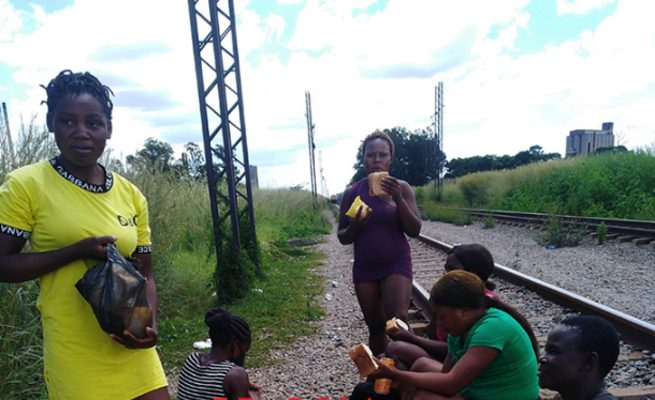 A 29-year-old self-confessed se_x worker has traded the oldest profession for her academic qualifications.

Sharon Mazvihwa who made headlines when she was captured last week along the railway line loitering for the purpose of prostitution said she was shocked to receive an interview letter for a job she had applied sometime in December 2020.

Sharon, a mother of two children with 12 points at A’ Level is now working at an organisation which deals with disadvantaged women.

She claims she got into pr0stitution because of se_xual abuse cases.

“I felt undressed although I was half nak_ed when H-Metro lenses captured me along the railway line as I preyed for men who would then give me money in return of se_xual favours,” said Sharon.

“Little did I know that it was my last day in the old profession and my fears were for the future and status of my children who would see the photographs when they grow up.

“I am the one who was captured eating bread and I was the one who had bought the bread since my fellow se_x workers had no food the whole afternoon and were exposed to hot weather.

“My tears dried up when I received a call for an interview from one of the organizations that helps women and children.

“They considered my application I made some time in December 2020 and today I am happy to inform H-Metro and their readers that God has opened a door for a better life.

“Education is the key and today my academic qualifications I attained during my school days at have paid me,” said Sharon.

Sharon narrated how she ended up into se_x work.

“I grew up living and knowing my mother only.

“My mother got sick and passed on and I decided to leave my step father to stay with friends and this how I ended up joining se_x workers.

“I never enjoyed the old profession that is why I kept on applying for a job to various organisations and I thank The Centre for Se_xual Health and HIV AIDS Research Zimbabwe (CeSHHAR) for considering my application.

“The organisation offered employment to her on merit,” said Macheche.

“We were not aware that she was into se_x work but our organization assists women to a better life and assist se_x workers to leave the old profession and get better jobs,” she said.