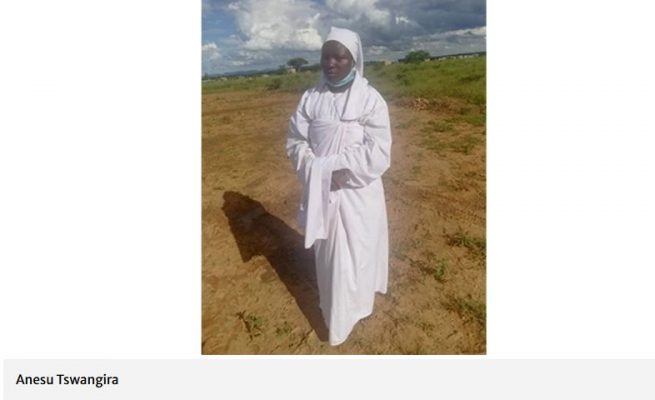 A woman from Kensington plots on the outskirts of Bulawayo, who thought she was preg_nant because of her stomach which started swelling five months ago, was shocked when it was revealed to her by a prophet that her enormous bump was a result of witchcraft.

The truth was much worse when the woman, Anesu Tswangira (20), who mistook the bulge for preg_nancy, was prophesied on by Madzibaba Emmanuel Mutumwa of the Johanne Masowe weChishanu sect, who revealed that the swelling of her belly was caused by black magic.

Madzibaba Mutumwa sensationally revealed that one of her husband, Mthokozisi Tshabalala’s female relatives who didn’t want her to become intimate with her husband, stole her two panties and allegedly “fixed” them with juju.

He revealed this on Saturday during a donation of mealie-meal to villagers, mostly the elderly, in Sihlengeni under Chief Sigola’s area, Matabeleland South province.

Tswangira was among the people who thronged Madzibaba Mutumwa’s new shrine in Sihlengeni where he donated about 100 bags of mealie-meal.

Things came to a halt when Madzibaba Mutumwa, who apparently sensed that something was wrong with Tswangira’s “preg_nancy”, went into a trance-like state and summoned her to the front and prophesied over her.

“What you’re carrying is not a baby, but you are suffering from a mysterious condition that led to uncontrollable swelling of your stomach which makes you think you are preg_nant. You were cursed by one of your husband’s female relatives who didn’t want you to be intimate with him (husband).

It was after she stole your two panties which she fixed with juju. She stole the panties when she visited you and she hid them under a big rock behind your house,” revealed Madzibaba Mutumwa before he ordered four women to accompany Tswangira to her house to fetch the underwear so that he can burn them.

A deathly silence engulfed the shrine a few minutes later when the women later brought the cursed underwear which the prophet ordered to be burnt as a way of removing the curse.

In an interview with B-Metro a terrified and emotionally disturbed Tswangira said when the “preg_nancy” first appeared she was excited and hoped to give birth to a baby within nine months.

“When I noticed I was gaining weight around August last year I thought I was preg_nant since I had stopped men_struating. I was also shocked when I recently visited the hospital for prenatal care and nurses told me that I was not preg_nant. I was confused until today when Madzibaba Mutumwa told me that I was bewitched. It’s true that the condition started the same month my two panties went missing and the suspect is one of my husband’s relatives,” explained a teary Tswangira.

She insisted that before “healing” by Madzibaba Mutumwa hers was a “preg_nancy” that kept bulging and was very uncomfortable, adding that the stomach left people offering her seats on public transport and asking about her due date.