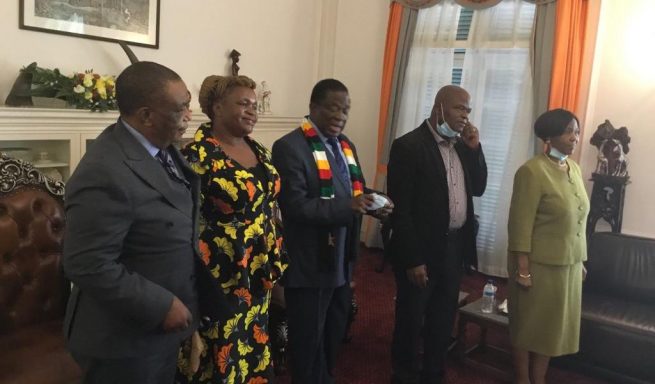 The two were yesterday welcomed by Zanu PF First Secretary and President Cde Mnangagwa at State House where they held an hour long meeting with the Head of State.

Briefing journalists after their meeting, President Mnangagwa said he was happy to receive the two whom he said were welcome to return to their political home.

“They have decided to join Zanu PF. They are both from Midlands Province where I also come from. They came to say toda kudzoka kumusha, kumusha ndiko kuZanu-PF (we want to come back home and Zanu PF is our home) and we welcome them,” said the President.

In interviews, the two said their decisions were informed by personal considerations.

“Basically this has to do with putting the nation first. I want to stress that this is a personal decision that I have taken. I have travelled long within a political arena and I need to contribute to the development of the country using the experience I have acquired.

“The only way for me to do that is to join the ruling party which has the policies that drive the country,” said Chebundo.

He hailed President Mnangagwa whom he described as accommodative in their interactions despite the fact that they once contested against each other in 2000 for a constituency in Kwekwe.

“I found him to be very welcoming and accommodating. Indeed, I made this decision knowing that there will be throwing of stones on me from my former party, but then, difficult decisions have to be made,” he said.

Timveos castigated the MDC-Alliance for opposing the Government for the sake of it.

“This is my decision. The opposition is opposing for the sake of it. It is time to develop the nation. We should unite. The more we oppose a Government that is trying to develop this nation the more we are doing wrong.

“I have had enough of opposing for the sake of it. I have sat down with my family and resolved to join Zanu PF. I was surprised by the welcome I got from the President. We felt at home. This is when you realise that social media is causing damage,” she said.

“It shows that Zanu PF is a people’s party which is tried and tested. Zanu PF has always had its open arms ready to receive any Zimbabwean who believe in our policies. This is happening during the Second Republic.

“They are showing the confidence they have in His Excellency President Mnangagwa and Zanu PF policies,” she said.

Timveos has since written a letter to Mr Chamisa informing him of her decision to resign from the party and join Zanu PF.

“After careful consideration and introspection, particularly on how the MDC party has been conducting its business, I have come to the conclusion that nothing constructive with regards to democracy, good governance and the well-being of Zimbabweans in general, would ever come out of the MDC-A,” she said.

“The MDC senior leadership’s intolerance to divergent views and power-hungry tendencies have caused serious divisions and disintegration of the party.

“The party’s retrogressive and confrontational approach and violent tendencies have led to the unnecessary destruction of property, injury to innocent civilians and destabilization of the economy,” she said in her letter to Mr Chamisa.

The defections come after Mr Chamisa lost control of the main opposition party to Douglas Mwonzora who won the party presidency at extra-ordinary congress which was held in December to elect Morgan Tsvangirai’s successor.