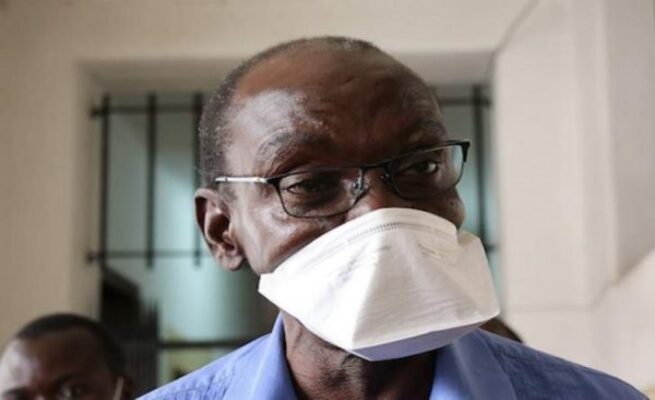 ZIMBABWE is finding itself caught in the se_xual proclivities of its top leadership and regaled by the phone calls allegedly between the Vice-President of the country and two married women, all in the midst of grinding poverty and the deadly COVID-19 pandemic that has left its economy on a partial shutdown.

After two weeks of media revelations about his se_xual escapades, Vice-President Kembo Mohadi finally had his say and it was typical of politicians: deny and confuse.

In the five-minute-long Press conference, Mohadi claimed that he was being framed by his political detractors, but later in the same statement, said his privacy had been invaded.

Invasion of privacy means intruding into one’s life without any justification, therefore, when Mohadi says the leaked audio trashed the rights to privacy of his communications; he is actually acknowledging the authenticity of the recorded calls.

He is saying that those who exposed the recorded calls between him and his lovers actually erred in leaking them because they invaded his private affairs.

The Vice-President should remember that public figures have the right to privacy, but those are limited because they have a mandate to serve the public, hence their affairs and conduct is open to public scrutiny.

He refused to take questions from journalists after the brief Press conference. Why refuse to answer questions if he is being framed?

Following public outcry that he resigns, Mohadi cited support from “fellow comrades” who he claims understand the situation he finds himself in. In other words, he is bragging to citizens that his fellow comrades, obviously the top leaders are condoning his behaviour.

The Vice-President has threatened to take action against the political detractors whom he does not name. Why not name them; after all they have put his name and his alleged shenanigans to shame, publicly.

Also, the Vice-President wants Zimbabweans to believe that his security was breached and that his communications were easily hacked such that his phone was easily cloned by an anonymous person?

That is a serious security breach at the highest level of government and means that as a country we are not safe if two-bit hackers can compromise the communications of a whole Vice-President at the drop of a bond coin.

Voice cloning is an information technology system which involves creating speech that cannot be distinguished from the original speaker, but Mohadi did not present any evidence to prove that indeed it was a set up or that it was not him on those saucy phone calls.

Mohadi’s fervent denials also expose the poor communications in the regime because a few days earlier, government spokesperson Ndavaningi Mangwana had defended the Vice-President’s conduct, arguing that the escapades — some of which evidently took place at his Munhumutapa offices — involved two consenting adults and as a result they were no one’s business.

Mohadi must not take Zimbabweans for fools and we take a dim view of the fact that our leaders have no moral spine or compass. The Vice-President must just take full responsibility for his actions; admit his wrongdoing and resign, if he still has any self-respect.