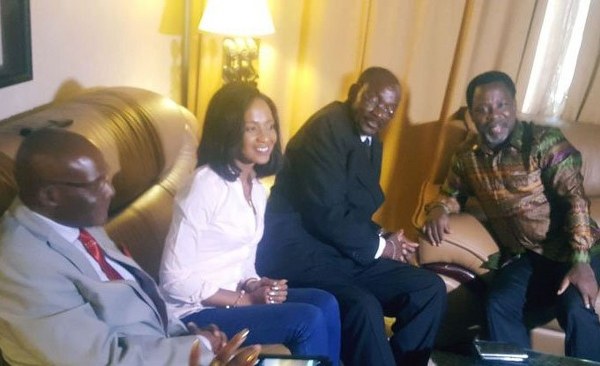 VICE-PRESIDENT Kembo Mohadi (71), who has been battling a series of se_x scandals allegedly involving married women, his aides and students, yesterday resigned to “save government’s image”.

In a four-page statement, Mohadi, however, blamed “social media ecologies” which exposed his alleged immoral unions for his demise, adding that he was a victim of information distortion, sponsored spooking and political sabotage.

Mohadi becomes the first person in the Presidium to resign after a scandal.

He said he wanted to deal with his problems outside government.

When reports of Mohadi’s se_xual scandals surfaced last month, he declared that he would not be pressured to quit, saying his fate would only be decided by his principal, President Emmerson Mnangagwa.

This was after audio conversations between him and his alleged girlfriends, who include junior married intelligence officers seconded to his office, went viral, with the Vice-President claiming at a hurriedly-organised Press conference on February 25 that his mobile phone had been hacked and his voice cloned to destroy him politically.

At the Press conference, Mohadi said he was a victim of a “weird character assassination” well choreographed to demean, condescend, and soil his image as a national leader and patriot.

Mohadi then threatened to sue ZimLive editor, Mduduzi Mathuthu, for the exposé.

But yesterday, in his resignation letter, Mohadi stated: “I thank you for the tasks that I accomplished effectively and I ask for forgiveness for those tasks I failed to do well. I have been going through a soul-searching pilgrimage and realised that I need the space to deal with my problems outside the governance chair.”

He said his decision to resign was not a matter of cowardice, but was a sign of demonstrating great respect to the Office of the President so that it is not compromised or caricatured by actions linked to him.

“The interconnectivity with social media ecologies have been relaying viral moral panics, peddling flames of lies, creating myths, and muddling the reality of my life as a family man. I am a victim of information distortion, voice cloning, and sponsored spooking and political sabotage,” he said.

“Digital media, in their hybridity, have been abused by my enemies to blackmail me, but my spirit will never die. Following the recurring disinformation and virilisation of my alleged immoral unions, dispensed through awkward slacktivism, I am stepping down as the Vice-President of the Republic of Zimbabwe in terms of section 96(2) of the Constitution of Zimbabwe (No 20) Act, 2013 with immediate effect.

“Hard as it may be to my family, friends, comrades and cadres of my party, Zanu PF, I am taking the decision to step down as the Vice-President of Zimbabwe, to save the image of my government.”

Mohadi added: “My resignation is also necessitated by my desire to seek clarity and justice on the matter in which my legal team will pursue and deconstruct this pseudo-paparazzi and flawed espionage to achieve cheap political points. I promise to poke holes on this grand strategy from political foes.”

After parting ways, Mohadi moved in with Juliet Mutavhatsindi — first known to the public at Mohadi’s swearing in ceremony at State House in 2017, who also left him over alleged infidelity.

Presidential spokesperson George Charamba could not comment on Mohadi’s resignation.

He said curtly: “That would be his own communication. I speak for government and that will be his personal decision.”

Mohadi was appointed as Second Vice-President on December 28, 2017.

Before that, he had served as Defence, Security and War Veterans minister, State Security minister as well as Home Affairs minister.