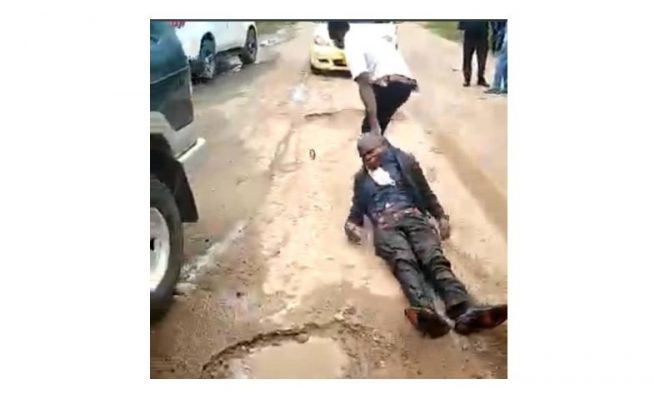 THE man whose video being assaulted by a soldier for allegedly cheating with the former’s wife went viral has dismissed false information circulating on social media.

Reward Chaterera, an ardent follower of Christ Embassy Ministries, dismissed reports that he was a chaplain in the army and that he succumbed to injuries sustained from the beating by the gunman, only identified as Baba Lolo from Glen Norah.

Chaterera told H-Metro that he was a civil servant and neither a church pastor nor chaplain as reported on social media after his video being assaulted went viral.

He was caught with the married woman, only identified as Mai Lolo, in his car. He said he did not miss work over the incident and most of the reports circulating on social media about him were false.

“I am alive and going to work, not reports circulating that I passed on due to injuries sustained.

“Had it not been the issue of protocol, I could have narrated what exactly took place on the day in question and I even wanted the woman to be there as well.

“The incident took place in Glen Norah. That is what I can say for now since I will need permission from my superiors to comment in detail,” said Chaterera.

H-Metro established that Chaterera is in the procurement department at Defence House and resides near Ardbennie in Mbare, which is almost 15 kilometres from the place where the incident occurred.

Chaterera never lodged a complaint with the police against Baba Lolo.

He only lodged a report at the latter’s workplace, which he quickly withdrew for reasons best known to himself.

Baba Lolo is a bus driver under the national army and was not punished for assaulting Chaterera since the latter withdrew the assault charges.

The incident took place near a garage along Zvimba Road in Glen Norah A.

A visit to Baba Lolo’s house in Glen Norah A led H-Metro to a woman who identified herself as a co-tenant of the “gunman”.

One of the neighbours said Baba Lolo threw a party at the house soon after the incident and was not sure if Mai Lolo attended it.

“We witnessed a sad drama and we were not sure about Chaterera’s life considering the way he was assaulted,” said the neighbour.

“Residents are still in fear and police officers came hunting for the soldier, but no one disclosed his whereabouts out of fear.

Efforts to get comment from Zimbabwe Defence Forces (ZDF) spokesperson were fruitless.

However, impeccable sources said the issue was treated as personal considering that Chaterera withdrew charges against Baba Lolo.

“I do not see you getting a comment from ZDF considering the fact that Chaterera withdrew the charges and it is being treated as a personal matter,” said the source.

He also gave details, which explains why social media is awash with claims that Chaterera is a chaplain.

“Chaterera is popularly known as pastor at his workplace because he loves to share biblical messages uye haafarire majokes ezvinyadzi, but hatina kufara nemaroverwo aakaitwa considering that he was just seated and talking to the woman.

“We do not encourage people to take the law into their own hands in solving disputes and people should not be influenced by the mob,” said the source.

In the video circulating on social media, Chaterera was seen being dragged from a parked car where he was in the company of Mai Lolo and the two were forced to roll in mud and assaulted by Baba Lolo.

He was further dragged, dressed in a suit and tie, assaulted and head butted by Baba Lolo, while onlookers shouted at him to treat Mai Lolo in the same manner. Others warned Baba Lolo against mercilessly assaulting Chaterera.