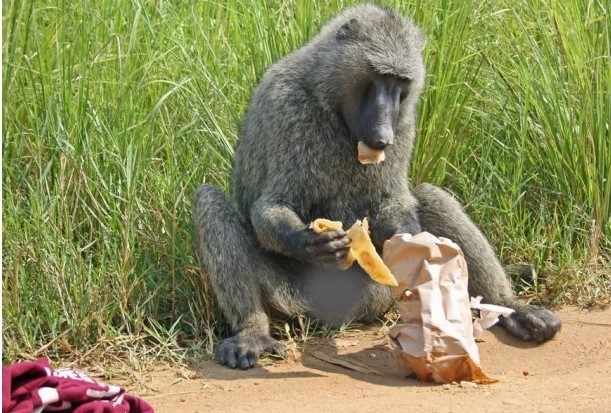 BABOONS are causing havoc in Victoria Falls where they have developed a habit of ambushing people and snatching food from them.

They have become violent and charge at anyone carrying food.

While the presence of baboons is not unusual in border towns and ports of entry such as Victoria Falls including Kazungula, Beitbridge and Chirundu, lately they have been vicious as they enter shops and houses to steal food.

The behaviour is probably triggered by hunger as they cannot find fast-food leftovers in rubbish bins which are always empty because of lack of tourism activity and restricted operation of restaurants.

While elsewhere baboons feed on wild fruits in the forest, Victoria Falls and other border towns’ baboons have developed a liking for homemade food and leftovers from restaurants hence they move around emptying bins as they scavenge for leftovers.

However, baboons now enter houses and shops to steal food.

A few days ago a baboon caused a stir when it entered OK Supermarket and stole a packet of chips.

It attempted to go in through the front door but was chased away. Undeterred, it returned to enter through the roof and jumped into the shop through the ceiling, leaving shoppers shocked.

The baboons have reportedly been breaking windows to gain entry into shops.

A news crew has been observing baboons scavenging for food in bins which they empty thereby polluting the area.

Some move in troops while others attack as individuals.

The central business district is the worst affected.

Speaking on condition of anonymity, some residents said the baboons had turned Victoria Falls into a war zone.

“We clean baboon poo in the office almost every day. I think they had mastered the lockdown business hours and would enter the shops once people knock off. Lately they have been breaking into shops even in the presence of people. They broke two window panes into our shop and have been sneaking inside and mess around before entering the ceiling. Sometimes we see them peeping inside wanting to come in,” said an employee at one of the shops.

Residents have appealed to the Zimbabwe Parks and Wildlife Management Authority (ZimParks) to drive the baboons away.

They said it’s now risky to move around carrying food as the baboons can differentiate plastic bags from food outlets from those from other shops.

Residents said women have fallen victim to the menacing baboons more than men.

Recently some baboons ambushed three women who were carrying some groceries forcing them to seek refuge at the ZimParks town office.

“Some now camp in front of Chicken Inn or OK shops and snatch whatever they see people carrying. One baboon recently caused a stir when it entered OK shop, went on top of a butchery fridge before jumping onto a nearby shelf where it snatched a packet of chips and fled. On another day they charged at a man who had just bought two pies and he threw them down as he fled,” said a source.

Tourism operators fear the baboons will harass tourists if they are not driven away.

“Baboons have become a real menace in town because companies are closed and there is no food in rubbish bins.

These problem animals may continue to harass people when tourism opens as this is their new behaviour hence we implore national parks to capture them and migrate them elsewhere,” said tourism executive Mr Clement Mukwasi.

Councillor Netsai Shoko whose Ward 2 covers the central business district said the situation has gone out of hand.

She implored ZimParks to drive away the animals.

“The baboons are now roaming freely and terrorising residents and school children from whom they also snatch school bags.

“People can’t freely walk around carrying groceries. Last week we rescued a small boy in Chinotimba as baboons charged at him because he was carrying some food. They get into yards and sneak into houses where they open fridges and cupboards to steal food. Nearly everyone is complaining about the baboons and ZimParks has to do something,” said Clr Shoko.

Even rural communities are also affected.

Chief Whange said some villagers in Kasibo are staring hunger after their maize crops were eaten by marauding baboons.

“We have a serious problem of baboons. They are too many and we have reported to rangers who drove them away but they have come back. People were expecting a bumper harvest but their fields have been destroyed,” he said.

News Muza Mpofu - 20 April 2021 0
A SELF-STYLED prophet and son of a prominent church pastor was on Saturday humiliated during his wedding in Budiriro. The wedding, however, proceeded after the...
Loading...