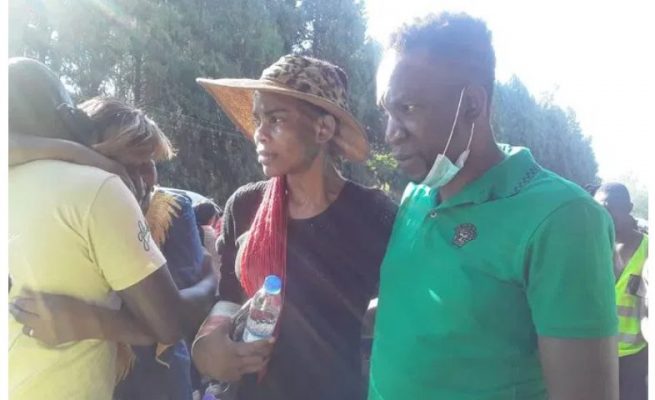 WHILE divorce proceedings between Vice-President Constantino Chiwenga and his estranged wife Marry are yet to be completed, fissures continue widening in the decade-old marriage, with Marry crying foul over what she describes as worsening abuse and intimidation.

In an interview, Marry (MC) told The NewsHawks reporter Bridget Mananavire (BM) how the Vice-President is allegedly abusing state institutions, political power and authority to hurt her by, among other actions, blocking her from seeing their children for almost a year-and-a-half.

BM: You said you are experiencing abuse at the hands of your husband and military personnel. In what way are they doing this?

MC: Because I have lived most of my life with him, being around soldiers, I don’t fear soldiers, also because there was like a family unit with the soldiers around us.

The people in my office will run away because they’re afraid of the soldiers. They are threatened.

When they went and ransacked my office in Domboshava, everybody ran away. I had more than 20 people working there, they all ran away.

And before running away they were ordered by armed soldiers to load all my belongings into a lorry, and this was during the time I was in prison.

They cleared my office, took all my files, took all my client files, we had six filing cabinets and they were all taken.

Client information is confidential, between the client and the consultant.

They took bank statements, contracts, invoices of things, they took personal documents, my registrations of different things; company registrations, vehicle registration, title deeds, everything. The office was for events, and I had even had a party for my children there.

And they recently broke down my Highlands office wall, and it was done at night. Our wall was very strong, it could not have just have fallen on its own. Now our office is open and vulnerable.

BM: Have you tried engaging the Zimbabwe Defence Forces (ZDF) or their commander to find out why soldiers are being used in a domestic matter?

MC: Yes, we have before. And even now I have written him (ZDF commander Phillip Valerio Sibanda) a letter. My lawyer, Beatrice Mtetwa, also wrote to them before.

I have also written to (ZDF commander Philip Valerio) PV Sibanda which we were typing, to say your soldiers continue to terrorise my office, because the Vice-Pesident doesn’t have soldiers, the soldiers serve under PV so they belong to him.

BM: Let us move to the issue of money. Last year, we reported that CBZ Bank had frozen your accounts, did they finally unfreeze them and can you now access your money?

MC: I do not know what to call it. They said that if I want money I must apply for it. So, in December I applied for money and they did not give it to me. They also did not give a reason why.

Then in January, I said to them, I needed money for school fees for my children. They said to me write a letter.

I wrote a letter, but no money. Last month, I asked them if they were just tagging me along after The NewsHawks reported the issue.

So, I asked them ‘do you want to give me my money or you are just pulling me along?’ I told them I have international payments, I’ve got equipment that I bought in China, that needs to be paid for.

I have medical bills in South Africa that need to be settled. They said they could make a plan on the medical bills but said it would be difficult to pay for my equipment. I don’t know how I will pay for them.

Last month, I told them I need money for salaries, and they said I should write a letter and they gave me the money. But I wrote another and they did not give me.

BM: Would you say you have financial freedom?

MC: No, definitely not. I have to ask for my money from the bank. It is different from anyone else who just walks into a bank and has access to money. I don’t have that freedom.

There is no financial freedom, I must beg for my money. For example, I asked for money to fix the wall at the office yesterday, they demanded to know what we want to buy who are the suppliers and if the bank can make direct transfers.

For what? They should just give me the money to buy the things.

BM: Did they explain to you why they had frozen your accounts?

MC: No, they just lie that they had never frozen the accounts. And I told them I am going to sue them because they were refusing with my money.

I needed to pay fees for my two other children and they refused with that money. From January to December without money, you move with a begging bowl.

I have a son who is in Lower Six now and a daughter doing Form One so for those two I had to ask for money and I asked for money from HE (President Emmerson Mnangagwa). He did not give me and he did not respond.

BM: How is your health now, how are you feeling?

This is including physiotherapists, because I need physio, but they’ve also been threatened and they said they are scared to meet me because the VP threatens them and this is what they say.

They are afraid of the VP, they were told at work not to look after me. So they don’t help me and for me to go and get international medical attention they have refused with my passport.

We appealed against that court ruling at the Supreme Court and we lost. And I asked the President to give me another passport, so that I can get medical attention.

He said he was going to secure a passport for me, and money to go and get medical attention, but it’s out of the window.

I need medical attention and if I can get it sooner rather than later because I have come a long way talking about my treatment.

The VP went out to get medical attention several times but why is he refusing for me to be treated?

BM: What is the update with regards your divorce case, where is it now?

MC: I have no idea. It was supposed to be heard on the eighth of February, but it was cancelled.

But really what I would like is for all of this to be behind me because I want my children, my properties, my matrimonial benefits, my spousal benefits, which I’m supposed to have been getting since last year.

I want my vehicles and life goes on. But I also would like an apology from the Vice-President. He owes me an apology for everything that he’s done to me and my family, because he knows what he says happened didn’t happen.

He doesn’t even believe his own lies.

He knows that nothing like that happened. So, one day I’d like an apology from him for everything that he has put me through.

It will just be an apology really, but nothing can take away what he has done. It doesn’t matter that he was lied to and that is why he did what he did or whatever.

Nothing can take away your own husband sending you to prison. Even if I had done it, he could have just said ‘you know what Mai Tendai, you went too far’ and he would have just taken me back to my family, not to throw me in prison.

That was extreme and he knows that he overreacted, and it will eat him for whatever amount of time was left in his life.

You even look at yourself and say at 40 I am looking after somebody who is this sick. You know, it was like I did not have a life.

He was my life. And then, when he was ill, I even stopped having a life and it just became a life for him.

So, all of that, imagine you have a life with your husband and your children, then all of a sudden it is life for him, you know you’re like a 24-hour doctor. My husband is a baby at heart.

When he is sick he cries, when he’s worried and he’s unhappy he cries and I got to comfort him.

I would try everything to get him medical care, calling doctors and at one time when he got sick I made all efforts to get hold of the President who was not around.

And eventually he came back.

I would do everything to cater for him. I did everything, everything you can think of when taking care of a sick person and my payment for that was prison.

When you are expecting your husband to come buy a cow to take to your family as gratitude, he comes back and has you sent to prison, you can imagine.