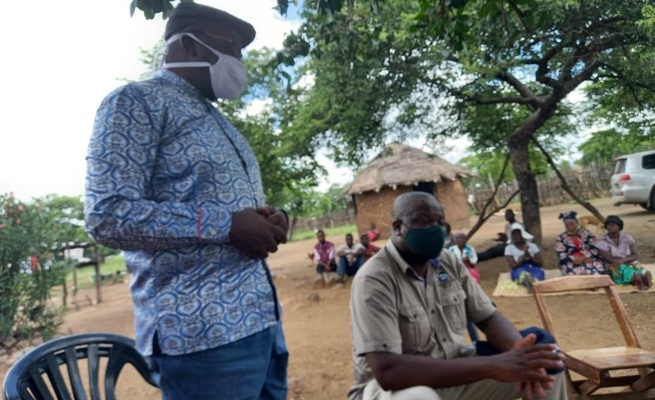 STATE security agents are intimidating villagers in Chilonga in a bid to force them to accept their forced relocation to pave way for a lucerne grass project by a dairy company Dendairy whose owners are close associates of President Emmerson Mnangagwa.

Villagers told The NewsHawks this week they were getting daily visits and threats from state security because of their stance against forced movement.

The community said they no longer feel safe among foreigners coming into their areas, including journalists, fearing that they may be state agents who are terrorising them daily.

They said the surveillance intensified after a visit by MDC Alliance leaders last week, a trip which was not detected by state security who only got to know about it after seeing pictures on social media.

A community leader, Tiyani Chilonga, who accompanied The NewsHawks to Chilonga on Wednesday, said outsiders were trying to create divisions in the community so that they do not challenge the evictions as a united front.

He said it is not a secret that people in the south of Runde River are against the relocations which will be the second in their lifetime.

Chilonga said the minority Shangaan people have been voting for Zanu PF since 1980 after having contributed immensely during the liberation struggle as part of the famed Gaza province and were thus surprised that their leaders had abandoned them.

“I can tell you that our people are now in fear on daily basis due to this project and they are not free to speak to any outsider. I am a community leader, being a member of the Chilonga headmanship and our people are not accepting that project. We were moved from Triangle and Hippo Valley to pave way for sugarcane farming and it is unfair for us to be moved again. Some of us were also moved from Gonarezhou National Park and Malilangwe Conservancy to pave way for animal sanctuaries so we cannot move again,” Chilonga said.

“We know what happened to victims of Tugwi-Mukosi who were relocated to Chingwizi without any compensation so accepting this initiative is suicide on our side. We are supporters of the ruling party and that is not a secret and this treatment is uncalled for.”

Mkachana Baloyi from Chibwedziva told The NewsHawks that surveillance by state security intensified after a visit by MDC Alliance officials last week. He said agents are visiting homes of people who met the opposition figures to issue threats.

“We are in a tight situation my brother,” Baloyi said. “The number of security agents has increased after the visit by Tendai Biti and his team. That is intimidation at its highest level in a free country from our fellow brothers. We were never consulted on this project, that was an ambush during a Covid-19 lockdown. If we raise objections, they say we are raising tribal issues, but the truth is a lot of land is lying idle in Mashonaland, Midlands and other areas of Masvingo; why are they not going there?” asked Baloyi.

A Chikombedzi-based traditional leader said he was questioned by state security agents about the whereabouts of MDC Alliance officials but he told them that he was unaware despite knowing their
whereabouts.

He said the time to suppress people should have ended during the colonial era and it is not good for black people to oppress fellow citizens.

MDC Alliance spokesperson Fadzai Mahere said instead of threatening the Chilonga community, the government should listen to the concerns raised by the people in order to address them.

“We are aware that the regime constantly persecutes those who exercise their constitutional right to engage with the main opposition. We are deeply concerned that, instead of the state taking this opportunity to sincerely give the people in Chilonga an opportunity to be heard and ensuring their dignity, they are now terrorising them for speaking their truth. We condemn the proposed callous, unconstitutional evictions,” Mahere said.

“The decision must be reversed forthwith. It’s no answer that they now pretend the eviction will be carried out ostensibly for an irrigation project. The bottom line is that there should be nothing done on the land in Chilonga without the express buy-in and involvement of the people in Chilonga. Any proposed project in their homeland must benefit them directly.”