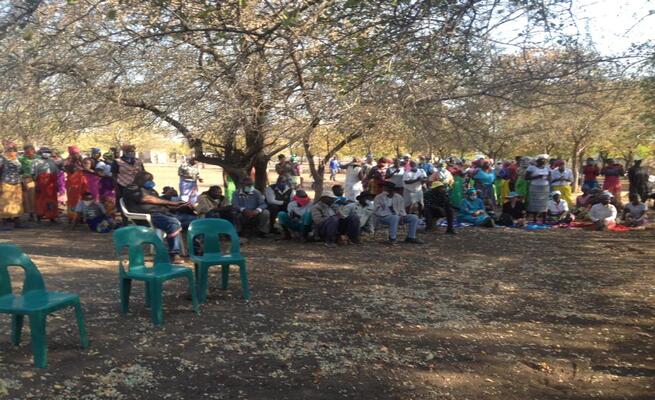 CHILONGA villagers, whose impending eviction from their ancestral communal lands has caused a major outcry, have vowed to stay put, accusing government of toying with them.

Some of the villagers, who spoke to the Zimbabwe Independent this week, said government misled them by giving them repeated assurances that they would not be moved, only to be hit by a Statutory Instrument two weeks ago legalising their eviction.

In October last year, the villagers ambushed Vice-President Constantino Chiwenga, when he went on a tour of the winter maize project at Hippo Valley’s Kilimanjaro project in Chiredzi and asked him to clarify their fate.

Chiwenga, at the time, assured them that they would not be moved since the country had plenty of land.

The Vice-President appealed for amicable conflict resolution. He was accompanied by commercial farmers Nick Swanepoel and Paul Kruger, when he implored citizens to dialogue wherever there are disagreements.

Chiwenga said at the time: “We have plenty of land, so let’s open it. Let’s create and give our people jobs here. No one is being moved from their land. There is no other country which will be created. God did his job and finished it. He is not going to create another world. Let’s forget about it. So our small teapot, let’s treasure it. Let’s work together. Let’s not be confrontational. If there is any problem in the country, let’s sit down and resolve it amicably.”

However, a representative of Chilonga village heads Vhelemu Livison Chikutu said there was no proper consultation with villagers, who were totally opposed to the government decision to forcibly move them.

“We cannot allow our ancestral land to be auctioned while we clap hands,” he said.

“If we ever allow this Darren Coetzee and Kruger to grab our land without resistance, then our children will never forgive us. We won’t go anywhere and that is why we had to apply for an interdict challenging the constitutionality of Statutory Instrument 50 of 2021 which was promulgated by government last week, together with its empowering provision being section 10(3)(d) of the Communal Land Act,” Chituku added.

“The government is not living up to its promises. If you remember last year, VP Chiwenga told us that whenever we have a deadlock, we should resolve the problem amicably. He also assured us that we will not be displaced, but the opposite is true.

“They just came up with an SI which had February 26 2021 as a deadline for us to vacate our ancestral land. Our destination was not specified. This shows how hypocritical our government can be. What the Vice-President said and what is on the ground is on the contrary. Anyway the bottom line is we are not going anywhere. We are waiting for them to make the next move said,” he further said.

Chituku was the first applicant while the land rights pressure group, the Masvingo Centre for Advocacy, Research and Development (Macrad) is the second applicant.

The SI 50 of 2021 ordered the Shangaan community to permanently relocate from the Chilonga communal land and the setting aside of such land effectively started from February 26, 2021, being the day of publication.

The Zimbabwe Environmental Law Association (Zela) has filed an urgent chamber application at the Masvingo High Court seeking to interdict government from going ahead with its plan to displace more than 12 000 villagers from Chilonga in Chiredzi to pave way for a lucerne farming project.

Government issued another SI 163A of 2021 stating that the Chilonga project was an irrigation scheme.