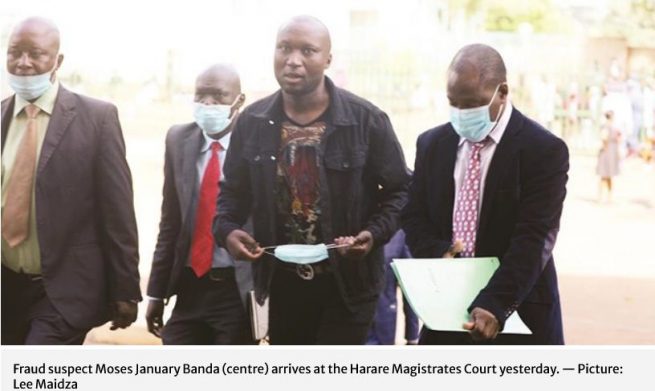 Fraud suspect Moses January Banda who is accused of theft of $22 million from TM Pick n Pay’s Steward Bank account surrendered himself to police over the weekend and yesterday appeared in court, distancing himself from the offence saying his hands were clean.

Banda distanced himself from the offence saying his hands were clean.

January (44) told the Harare court yesterday when he appeared for initial remand and his bail application that he does not know any of the other suspects who implicated him of playing a major role in the fraud.

Through lawyer Mr Luck Mawuwa, January told the court during his bail application that he had no links to Ronald Mudzingwa, Tonderai Salesio Chagweda and Tatenda Wellington Jombe, who have already been arrested in connection with the fraud and have been remanded to April 9 on $50 000 bail each. “He does not know the witnesses or the co-accused who implicated him. There is no evidence that proves that he played a role and even the State papers do not mention the link he has with co-accused.

“He is a law abiding citizen and the presumption of innocence tilts in his favour. There is nothing compelling to deny him bail. He also surrendered himself to the police. He will not interfere with investigations or witnesses since he does not know them or have links with them,” said Mr Mawuwa.

“One of the co-accused implicated him and he is likely to interfere with witnesses if granted bail. We have five other witnesses who are yet to have their statements recorded. The police have documentary evidence especially of the emails that were sent,” he said.

The State alleges that on January 28 this year, January acting in connivance with Mudzingwa, Jombe and Chagweda created an email address; Raymond.matsetswa@TM/supermarkets.com purporting as if it was for the supermarket’s finance manager Raymond Mutsetswa and the chief finance officer Gamuchirai Nyamuzinga.

It is said that they then sent an email to Steward Bank with instructions forms bearing forged signatures of Matsetswa and Nyamuzinga instructing the bank to debit TM Supermarkets account to four different accounts.

The fraud came to light on March 3 after TM Supermarket Head Office disputed these transactions and a subsequent investigation found that the instructing email came from a different address than that used by the finance manager.

Meanwhile, lawyers representing Banda yesterday said their client had no pending cases in court and denied allegations that he was a habitual criminal who had been on police wanted list since 2008 for multiple fraud cases.

In a statement yesterday, Mr Luckymore Mauwa of Mauwa and Associates Legal Practitioners said Banda was a law abiding citizen and reports that he was a habitual fraudster were false and malicious.

“These allegations are completely misleading and defamatory to our client who has not been criminally convicted by any court in this jurisdiction. Further, our client does not even have any pending case before the courts. We challenge anyone to lay bare such evidence to show that our client is a habitual criminal.

Mr Mauwa added, “In the meantime, our client is weighing his options as we feel that your conduct has grossly affected his reputation and standing in society which conduct necessitates a civil suit against the writer of the article and yourselves. Our client reserves this right and consultations are ongoing.”

They were charged with fraud when they appeared before Harare magistrate Mr Richard Mangosi.