In a suspected rap_e case, a Warren Park man was bashed by an angry mob after he was allegedly caught attempting to rap_e an eight-year-old girl and her mother yesterday.

Andrew Moyo (32), notoriously known as Bruvhosi, got a thorough hiding from furious residents after he allegedly sought to rap_e mother and child. In a statement Police spokesperson Assistant Commissioner Paul Nyathi confirmed the incident saying the suspect would appear at the courts to face attempted rap_e charges. 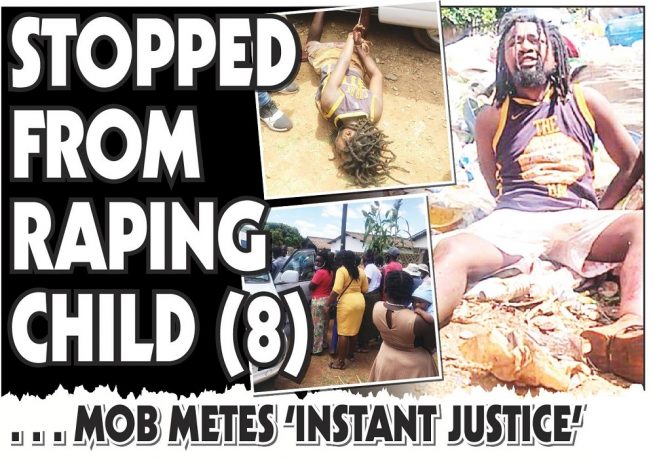 “The eight-year-old girl was sent to buy airtime and the suspect followed her home where he attacked the mother.

“He tried to overpower the mother then went for the little girl attempting to rap_e her, that’s when he was mobbed and met instant justice,” he explained.

Warren Park 1 police officers had to rush to the scene to intervene as the suspect was grievously assaulted by the angry crowd, that was baying for his blood.

“We saw him loitering up and down the road and we got worried. “Later on, I heard the child screaming and rushed to see what was happening only to find this rap_ist over the little girl with no trousers,” said the uncle who preferred anonymity.

Speaking to H-Metro, Collins Mwase, one of the locals said the suspect was a stranger to the neighborhood and he was acting weird.

“He stays far from here. We were surprised to see him around. “People are saying he sometimes loses his mind, but that’s not the case.

“We want to see him behind bars because he might get away with crime over fake insanity issues,” he said.

The rap_e suspect’s father identified as Mr Moyo told H-Metro that his son has of late been taking illicit drugs (Musombodhiya) which has put him in a fix.

“A few days ago, I received a phone call over my son from home telling me that he was just banging doors and so on.

“He would just start to dance and act funny and I suspect it is those drugs he is taking.

“I rushed here (police station) thinking it was one of his usual stunts and got the shock of my life that he is being accused of rap_ing a minor.

“I did not raise him this way,” explained the father.