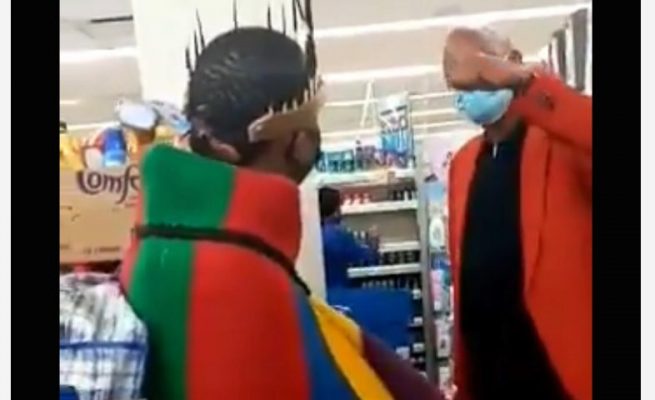 A Midrand mall manager who humiliated Ndebele activist and author Thando Mahlangu by hounding him out of a shop over his traditional attire has been suspended.

The owners of Boulders shopping centre announced that the manager has been suspended pending an internal investigation into the matter.

Mahlangu had taken a casual trip to the mall on Wednesday when he was told his attire was “inappropriate” and told to leave a Clicks store where he and his business partner Nqobile Masuku were shopping.

The incident, which was captured on video by Masuku, has sparked outrage on social media.

Redefine Properties, which owns the centre, has apologised for the events that unfolded when Mahlangu was humiliated in front of other shoppers, calling it “regrettable”.

“Redefine therefore distances itself from the degrading and undignified manner in which Mr Thando Mahlangu and Ms Nqobile Masuku were treated by the centre manager. The treatment meted out to Mr Mahlangu and Ms Masuku was devoid of the principles of human dignity and equality which underpin our constitutional democracy. In this vein, Redefine not only apologises to Mr Mahlangu and Ms Masuku, but it does so to the Ndebele nation as a whole and to all South Africans,” said Andrew Konig, CEO of Redefine Properties, in a statement on Thursday.

“It is imperative for Redefine to communicate that we are alive to the fact that no outcome of an internal action is capable of undoing the pain and embarrassment the action has caused.”

The company said as an immediate measure, it would strengthen diversity training efforts for all its centre managers.

“This matter has also illuminated for us, the need to continually review and revise our internal policies on an ongoing basis, in order to ensure that our policies are brought in line with the values and principles that recognise and celebrate the multitude of cultures that make up our diverse nation,” said Konig.

In the video clip, which has since gone viral, a man who describes himself as the mall owner tells Mahlangu that there is a right of admission and that he doesn’t condone Mahlangu’s outfit and he must leave.

The man continues to tell Mahlangu that the shopping centre is a public place and he is dressed indecently.

“You are telling me I’m not supposed to wear African [clothes] in Africa,” Mahlangu says.