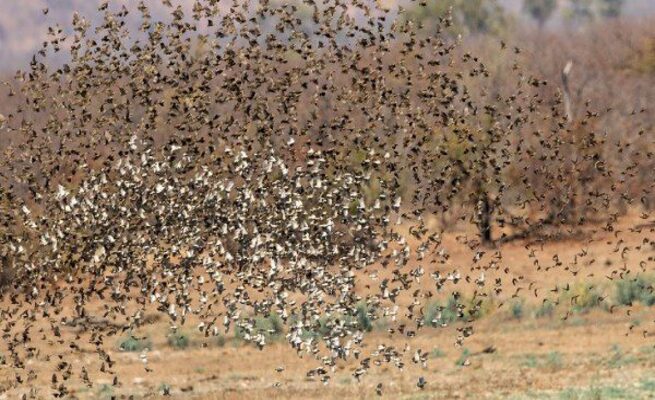 TRADITIONAL grains producers in Gwanda have been left counting their losses after quelea birds invaded the district and destroyed the staple crop, with the late planted grains being the most affected.

Farmers in the southern parts of Gwanda normally grow traditional grains such as sorghum and finger millet which do well in the semi-arid region.

However, the invasion of the quelea birds and armoured crickets in areas such as Sukwi, Silonga, Bengo, Mlampaheli, Halusupi and Kafusi has destroyed most of the late planted traditional grains crop.

Farmers’ hopes of bumper yields from their traditional crop have since been dashed.

“We are facing a huge problem with these birds , we have tried everything including trying to scare them off but we have failed,“ said one farmer

“As you can see from this field here its pathetic. Look at the area planted compared to what has been harvested, it’s a huge loss I tell you,“ said another farmer.

According to Agritex officer for Ward 18 Mr Kudakwashe Zhou, it is the late planted crop which has been affected, while good harvests were achieved by those who planted early.

“This is a perennial challenge, yes we have seen the breeding site which is at dordburn. Those who planted late are having field losses while those who planted in October managed to get good harvests,” he said.

Urgent intervention by authorities will be critical as the quelea birds could also affect the winter crop.

“On the issue of small urge farmers to plant their traditional early before they experienced bird invasions . I would also researchers or breeders to come up with varieties that are bird tolerant, like we have Tsholotsho beheaded variety which have thorny and cannot be destroyed by quelea birds while we also urge national parks to urgently intervene,” said Gwanda district Agronomist Danisa Dube.

Farmers in semi-dry regions have often been encouraged to grow traditional grains in order to ensure food self-sufficiency, with least 70 thousand hectares being put under the traditional cereal crops in Matabeleland South province this summer cropping season.