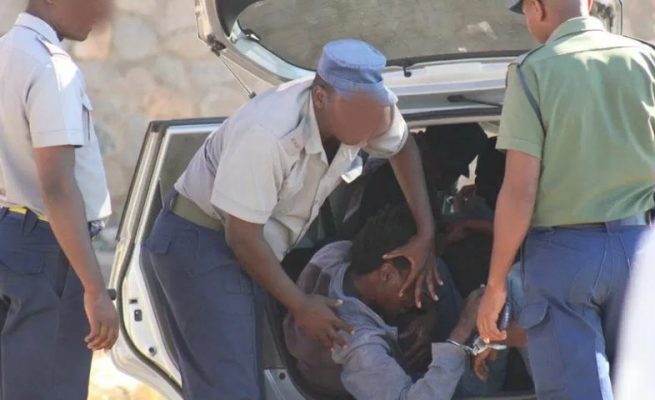 Three Zimbabwean traffic police officers and an accomplice allegedly robbed and assaulted four business associates before holding two of them hostage in a car boot.

The officers later dumped their victims 15 kilometres from their homes.

“Yes we can confirm the arrest of three police officers together with some civilians in connection with a robbery case that happened in Nyanga where people lost cash amounting to USD1245. The law will take its course and we will get to the bottom of the matter.”

According to police sources Forget Madzitire of Budiriro teamed up with Constables Tariro Rangarirai Madziwa, Listen Sibanda and Tatenda Ndlovu to commit the crime at the weekend.

The four were allegedly intercepted by alert detectives in Rusape in their gateaway car on their way back to Harare.

“One of the complainant’s sons Darlington Mawarira aged 20 of Claremont Farm, made a police report at Z.R.P Nyanga and police detectives at CID Rusape were alerted and they intercepted suspect’s motor vehicle leading to their arrest. Upon search US$648-00 and $160 bond notes, two pairs of handcuffs, one baton stick and a police identification card in the name of number 073671B Constable Ndhlovu. T were recovered,” the source said.

The complainants, Slyvester Makandwa, Sharon Netsai Chombe and Elton Mawarira were injured during the robbery and were referred to Nyanga hospital for treatment.

News Cynthia Goba - 12 August 2021 0
THERE was drama on Heroes Day along Leopold Takawira when a married man clashed with a se_x worker over a burst cond0m. Stanley Mutema’s neighbours...

News Edmore Huni - 12 August 2021 0
FASHION has always been about making a statement. This statement was made apparent by an Australian blogger Sam, from the Facebook page and website School...

Looking for the Best Casino Slots?

News Nelson Bhebhe - 12 August 2021 0
With more of us going online to find our casino fix there has been an unprecedented amount of new online casinos appearing on our...

Talented pr0stitute who calls herself Hot Plate in trouble as sister’s ‘ghost’ destroys her...

News Muza Mpofu - 12 August 2021 0
GETTING a job has not been easy for this woman, so she decided to become a magosha. She enjoyed being a magosha for four years...

News Muza Mpofu - 12 August 2021 0
SANELE Cebekhulu’s family from Ezintombini Village in Ntambanana, northern KZN, is heartbroken after they found his burnt remains in the Mvazane area on Tuesday,...

Chaos as jealous man visits ex-wife, peeps through window and catches her in bed...

News Edmore Huni - 12 August 2021 0
A Chitungwiza man was on Saturday arrested for attacking his former wife for sleeping with her new lover at her lodging in Zengeza 4. Bernard...

News Muza Mpofu - 12 August 2021 0
THE Progressive Teachers Union of Zimbabwe (PTUZ) yesterday said most public schools were not yet ready to open, proposing that they open mid-September when...
Loading...