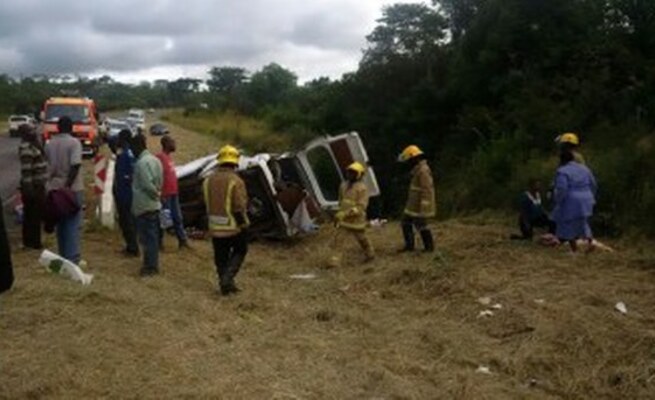 A TRAFFIC clearance police officer died when a motorbike he was riding collided head-on with a Toyota Altezza at the 131km peg along Harare – Chinhoyi Road near Lion’s Den while trying to clear way for the First Lady Amai Auxillia Mnangagwa’s convoy, police have confirmed.

National police spokesperson Assistant Commissioner Paul Nyathi confirmed the accident which occurred on Friday at around 4.30 pm when the driver of the Toyota Altezza, also a police officer, lost control of the vehicle while trying to pull off the road and swerved to the right, encroaching onto the lane ahead of an oncoming police motorbike resulting in the collision.

“Police confirm that on April 2, 2021 at 4.30 pm, a fatal road traffic accident involving Sergeant Freddy Chipato of ZRP Chinhoyi Traffic occurred at the 131 km peg along Harare – Chinhoyi Road near Lion’s Den. Sgt Chipato was on VIP traffic clearance duties riding a police motor bike while the First Lady’s convoy was on its way from Mhangura.

Suddenly, a motorist, Tinotenda Mutandiro, who was later identified to be a police officer stationed in Harare came driving a Toyota Altezza on his way to Karoi with one passenger on board. He tried to pull off the road to the left in a bid to give way to the clearing party but failed and swerved to the right.

The Toyota Altezza then encroached on to the lane of the motor bike which was proceeding in the opposite direction. The vehicle then collided with the clearing motor bike and Sgt Chipato died on the spot after sustaining serious body injuries,” he said.

Asst Comm Nyathi said the First Lady’s convoy, contrary to false reports on social media, was not involved in an accident.

“Police are treating this unfortunate fatal road traffic accident like all other accidents and reiterate that it has nothing to do with the First Lady’s convoy,” he said.

He said police will be mounting roadblocks and checkpoints throughout the holiday to minimize traffic accidents as well as ensuring compliance and adherence to road rules and regulations.

Videos & Pics Muza Mpofu - 20 April 2021 0
A BAYONET fixed on a rifle was used to cut the wedding cake that was adorned with the Zimbabwe Defence Forces badge and the...
Loading...