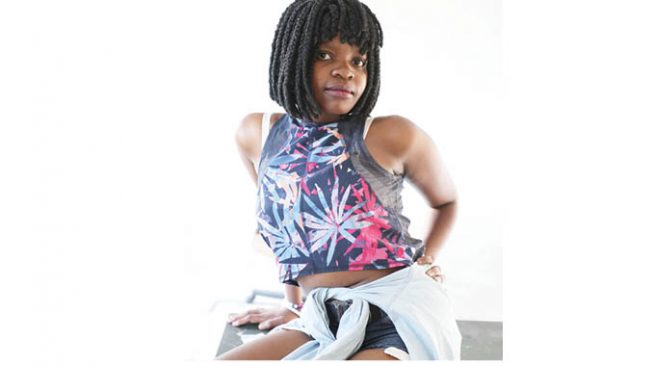 CONTROVERSIAL National University of Science and Technology (Nust) student Nobhekimpilo Mbovora fondly known as Vivica has set the Internet ablaze as she posted her nud_e pictures on her Facebook wall.

In the pictures, she is seen bending on her bed in a se_xually suggestive pose.

The Facebook post set tongues wagging and one social media user who goes by the name Phemia Tembo suggested that the second-year Computer Science student should just be an X-rated actor: “Yohwe nhaiwe wadii kungo actor p0rn hako (Why don’t you become a p0rn star).

Another Facebook user, who goes by the name Chris Shumba said: “Huya uwone mashura (Come and see a weird thing).”

Vivica says her main objective of posting such nud_es on social media is to change the perception and belief of society that a nud_e woman is of loose morals.

“Hatshi bo! (No) the society has to learn that someone who posts nud_es is not of loose morals, but it’s just an expression of female beauty. I don’t conform to society’s beliefs and expectations because I have my own beliefs.

“Society has to understand that we now live in the 21st century and the world has been compressed into a global village by the internet age,” she says with emphasis.

Vivica is not new to controversy.

“When I went to school wearing a revealing dress my college mates said I had tarnished my reputation after some fellow students captured me in that state and posted the images on social media, but I never made a fuss about that.

“Most of the people link morality to the type of attire and to me that is nonsense because the type of outfit does not really reveal the inner you or your true character. A cloth does not know anything about morals,” she said.

She said she usually gets messages from people who will be eager to have se_x with her.

“The funny thing is that some of those who comment negatively about my nud_es on my Facebook wall are the ones who inbox to meet up with me for a se_x session.

“I have stood my ground and warded off such se_xual perverts. Let me reiterate that my objective is to make a woman proud of her body, not for se_xual marketing,” she said.

Some people assume she was raised in a rough environment and that could be the reason behind her nud_e posts but she says: “I was raised in a loving family and I was never abused anyhow. My nud_es have nothing to do with my past.”

The brainy Computer Science student who passed her Ordinary and Advanced Level with As, has penned two books — 15 Secrets On How To Become A straight “A” student and How To Become a Feminist.

News Muza Mpofu - 14 May 2021 0
BHEKUSIZI Khulekani Moyo whose name literally means face the grief seems to be certainly facing trouble in his marriage because his wife Thandolwenkosi Ngwenya...
Loading...