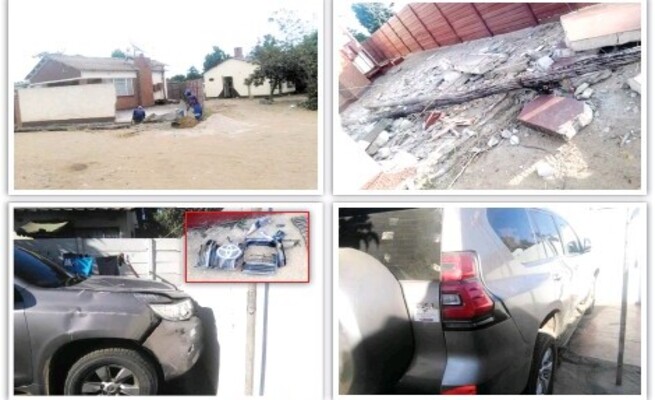 A LAND CRUISER PRADO belonging to recalled Mufakose Member of Parliament, Susan Matsunga, rammed into a precast wall before the driver fled the scene.

The incident occurred on Sunday morning at the corner of Mutufu and Mukumba roads in Mufakose.

The son to Matsunga’s sister, whose driving had become topical in the high-density suburb, was behind the wheel.

On Friday, H-Metro published a story in which Mufakose residents were complaining about the driver’s reckless driving, which they felt posed danger to fellow motorists and pedestrians.

Matsunga acquired the Land Cruiser Prado after entering into a Vehicle Loan Facility Agreement with Parliament of Zimbabwe and the vehicle was to be used during her tenure as a legislator.

“I heard a loud disturbing sound at around 4am on Sunday.

“I quickly peeped through the window and saw the driver trying to drive off the scene without even assessing the damage.

“The car left before I alerted anyone else in our house.

“When we got outside, a few women on their way to Mbare Musika alerted us that they had recognised the vehicle since it had become popular for picking and dropping commuters.

“We reported the incident to the police leading to the tracking of both the driver and the vehicle,” said one man from the affected houses, who spoke on condition of anonymity.

After police intervention, Matsunga is believed to have undertaken to pay for the damages.

“The police helped us call the MP and notify her of the incident. She did not sound surprised and was quick to accept blame on behalf of her sister’s son.

“She is providing most of the resources from materials already at her home and promised to pay other expenses in full later,” added the affected family.

Last week, H-Metro reported that the yet-to-be-identified driver behind the luxurious vehicle was endangering motorists and commuters with his reckless driving.

Meanwhile, there is a pending case at the High Court against Matsunga and 25 others instigated by Parliament of Zimbabwe to recover the vehicles or money equivalent following their recall from Parliament last year.